Congratulations to the following Randolph-Macon Yellow Jackets for being named to the 2022 All-Old Dominion Athletic Conference Team on Tuesday! (Release from R-MC Athletics)

Arruza has guided the Yellow Jackets to an 11-0 mark, setting a program record for wins in a season. R-MC has advanced to the second round of the NCAA Championship. Arruza has been named ODAC Coach of the Year five times.

Ihle is first in the ODAC and 19th in the nation with 14 rushing touchdowns. He is third on the team with 380 rushing yards and averages 5.5 yards per rush. Ihle has completed 10 of 15 passes for 145 yards and one touchdown. He also holds for field goals and extra-point kicks.

Jackson, Nixon, Matt Hale and Storm James make up an offensive line for an offense that is first in the ODAC and 12th in the nation in total offense at 484.2 yards per game. R-MC is ninth in the country with 43.5 points per game. The Yellow Jackets lead Division III in third down conversion at .627. R-MC is first in the country in team passing efficiency at 203.0. Jackson is a four-time All-ODAC First Team selection. Nixon was All-ODAC Second Team in 2021.

Grubbs has 31 tackles in 10 games. He tops the team with 11 tackles for loss (minus-74 yards) and 9.5 quarterback sacks for minus-72 yards. Grubbs has one forced fumble.

Deaver is second on the team with 45 tackles. He has seven tackles for loss for minus-27 yards and 3.5 quarterback sacks for minus-17 yards. Deaver had an interception and a 20-yard return in the win over Cortland in the first round of the NCAA Playoffs.

Jones tops the team with 47 tackles. He has one tackle for loss. Jones has two interceptions and five pass breakups.

Hutchinson has 33 tackles. He has nine tackles for loss (minus-42 yards) and 3.5 quarterback sacks for minus-26 yards. Hutchinson has two pass breakups and a fumble recovery for a touchdown. He was All-ODAC Second Team in 2021.

Harris is third on the club with 37 tackles. He had three tackles for loss. Harris has one interception that he returned for 36 yards. He was All-ODAC Third Team in 2021.

Hunt is second on the team with 27 receptions. He has 330 yards and four touchdowns.

Mayfield has 10 catches for 70 yards. He is also a strong blocker on the offensive line. Mayfield was All-ODAC Third Team in 2021.

T.J. James has 19 tackles. He has 1.5 tackles for loss and one quarterback sack. James also has one pass breakup.

Randolph-Macon will travel to Delaware Valley on Saturday, Nov. 26 for a noon contest in the second round of the NCAA Championship. 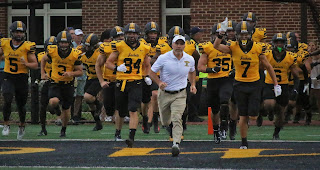 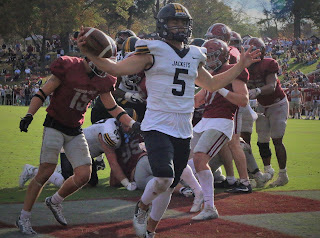 Posted by robwitham at 5:13 PM No comments:

Five former Yellow Jacket standouts, including four multi-sport performers, will be added to the R-MC Athletics Hall of Fame.

Mills was an NABC First Team All-American as a senior. During the 2002-03 season, he was ODAC Player of the Year, College Division State Player of the Year by VaSID, Richmond Times-Dispatch College Division Player of the Year, All-Region First Team and ODAC Tournament Most Valuable Player. Mille was ODAC Rookie of the Year as a freshman and All-ODAC First Team each of his final three seasons. R-MC was 82-30 during his four-year career. Mills helped the Yellow Jackets win the 2003 ODAC Tournament title and reach the Sweet Sixteen in the NCAA Tournament in 2002 as well as 2003. Mills is eighth on the school's career scoring list with 1,560 points, eighth in career rebounds with 751 and ninth in field goal percentage at 55.1%.

Price was a four-year letter winner in both football and lacrosse. He owns the career marks in program history with 1,036 pass attempts, 571 completions, 6,359 passing yards and 7,360 yards of total offense. Price was All-ODAC First Team in 2002 after being named Honorable Mention in 2000 and 2001. He was named Virginia State Offensive Back of the Year for Division II/III by the Touchdown Club of Richmond. In lacrosse, Price is 12th in program history with 82 goals and 124 points. He was All-ODAC First Team as a junior as well as Honorable Mention as a sophomore and senior.

Sammons was a four-year letter winner in both field hockey and lacrosse. She owns the field hockey program career records with 59 goals, 34 assists and 152 points. Sammons has the single-season record for assists with 16 and is second for goals in a season with 19. She was All-ODAC Second Team once and All-ODAC First Team twice. Sammons was All-South Region First Team in 1997 and Second Team in 1996. She had nine career goals and four career assists for the women's lacrosse team.

Waters served R-MC as a student-athlete, coach, and administrator. He was a four-year member of the football team and earned two letters as an offensive lineman for head coach Ted Keller. The Yellow Jackets went 21-13-3 during his four years and won the initial ODAC Championship in 1976. Waters was a four-year letter winner for the baseball team as a catcher and first baseman for head coach Hugh Stephens. R-MC went 68-32 during his four years and earned a bid to the 1977 NCAA Division II Baseball Tournament. Waters succeeded Coach Stephens as baseball head coach and recorded 260 victories in 22 seasons. He was three-time ODAC Coach of the Year. The Yellow Jackets won the 1987 ODAC title and Waters was State College Division Coach of the Year that season. Waters coach seven different ODAC Players of the Year, including six consecutive. Waters was an assistant and associate head coach for the football team from 1982-96, helping R-MC win five ODAC Championships and earn a bid to the 1984 NCAA Playoffs. He coached four football All-Americans. Including football and baseball, Waters coached 11 players who became ODAC Hall of Fame inductees. Waters was Director of Athletics at R-MC from 1998 to 2003.

The induction ceremony is scheduled for Saturday, Oct. 7, 2023. 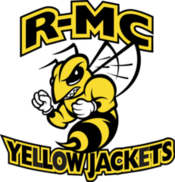 Posted by robwitham at 12:05 PM No comments: