The bad news for Patrick Henry's girls basketball team was the only thing more frigid than the outdoor temperature tonight was their outside shooting.

The Lady Patriots shot 12-of-58 from the field en route to losing their first Colonial District game of 2012-13, 42-32 to Deep Run.  The Wildcats weren't able to do much better, but took advantage of key rebounds and Patriots foul trouble to get the win, drawing them within one game of Patrick Henry in the district standings.

Patrick Henry, now 5-1, 9-3, next travels to Douglas Freeman to play the Rebels Tuesday at 6pm.

In the doubleheader nightcap, Lucas Pienkowski scored 17 points while William Holman hit four critical free throws in the fourth quarter to stave off a Wildcat comeback as Patrick Henry finally got their first district home win, 49-43 over Deep Run. 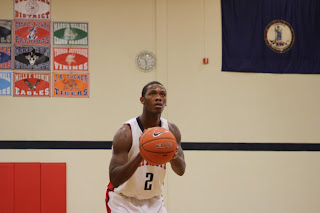 At Hanover tonight, the Lee-Davis girls lost a fourth quarter lead and fell to the Hawks 65-58.  Taylor Peay poured in 19 points to lead Hanover to their first Capital District win (1-2, 2-6 overall). Olivia Tuck led all scorers with 23 points for Lee-Davis, who fall to 0-4 in the Capital, 3-7 overall.

In boys action, Hanover had little trouble with Lee-Davis on their home court, winning 61-39 to move to 2-1 in the Capital, 5-1 overall.  Trayvonte Brown withstood a technical foul to score 17 points, while freshman Jalen Elliott added 17 of his own. LaDarein Autry led Lee-Davis with 17 points, while Josh Brown had 10.

The Hawks will face a fired-up Henrico squad on Azalea Avenue Friday night.  The Warriors are coming off a 74-72 upset loss to Armstrong tonight.....
Posted by robwitham at 11:20 PM