Heather Lewis and Kristen Dize each pitched complete games, each allowed a run, just eleven hits between them, as Randolph-Macon swept Randolph Sunday afternoon in ODAC action in Ashland by scores of 5-1 and 8-1.

Madison Gilman raised her ODAC-leading batting average to .488 with four hits in six at-bats, while Sharese Jarvis (below) went yard twice, both in the second game, and now has an ODAC-best 16 home runs on the season.

Randolph-Macon improves to 8-4 in the ODAC, 23-6 overall.  Sunday's games were the first two in a homestand consisting of five doubleheaders, the next one on Tuesday at 3pm versus Mary Baldwin, followed by back-to-back doubleheaders in the ODAC next weekend, Saturday against Bridgewater (and former Hanover star Brooke Throckmorton) and Sunday against Eastern Mennonite.... 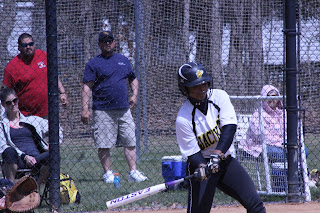 After an amazing second game performance Saturday to come back to tie a game on four different occasions en route to a 10-10, 16 inning tie called due to darkness against Lynchburg, the Randolph-Macon baseball team used that momentum to travel to Harrisonburg and sweep Eastern Mennonite Sunday in key ODAC play.

The Jackets won 7-5 and 11-7, as Jake Fletcher had a career day, going 7 for 9 in the two games, stealing four bases and scoring three times. Jake Bram picked up his first win of the season for the Jackets in game one, while Matt Fischgrund notched his second victory of 2013 in game two.

The baseball team has eight regular season games remaining, four in the ODAC, and next play in Fredericksburg at Mary Washington on Wednesday at 3:30pm.
Posted by robwitham at 1:16 AM