VHSL: Patrick Henry May Move To 4A In Next Realignment

When the Virginia High School League (VHSL) released its newest set of "ADM Numbers", which is essentially a list of student population totals of each member school, Patrick Henry High School in Ashland found itself amongst a new group of institutions.

At 1,435 students, Patrick Henry was listed as the ninth highest populated school in the 4A classification. The Patriots have been in the 5A classification, and in the 5A North Region, since the VHSL began working under a new six-classification system, eschewing districts in the playoffs for conferences in 2013. Patrick Henry has fifteen less students than the lowest populated school listed for 5A, Warwick High, who has 1,450 students.

When you look at the ADM report, however, you'll notice some disparity. Six of the eight schools listed above Patrick Henry have actual attendance figures higher than Warwick, but are listed as proposed 5A schools (Woodgrove, Deep Creek, Midlothian, King's Fork, Dominion and Huguenot). This is not special to 4A as each classification has some crossover in an attempt to keep the number of schools in classification, and, to a lesser extent, to their regions, as even as possible.

The VHSL released its agenda for the latest Alignment Committee meeting scheduled for August 4 in Charlottesville on Monday. Atlee is one of several schools asking for a change to the original plan, moving from the new 5A North to the new 5A Central Region. The committee recommended by vote in January to approve the move, but at the time, the move included Patrick Henry, too.

Now, with the Patriots proposed to move to 4A, joining Hanover, here are the proposed regions that will affect Hanover County beginning with the 2017-18 school year:

--All four county schools will continue to be in the Capital District for regular season scheduling, meaning a continuation of home and home series between all schools in most sports that began this past year when Patrick Henry was moved from the Colonial District to the Capital in exchange for Glen Allen.

--Conferences will be no more under the newest realignment plan. District Tournaments, last held in the 2012-13 school year, will be resurrected in Metro Richmond. In depth details on if, and if so, how, district results would affect individual region seedings are not yet known. They may have no effect whatsoever.

--For Atlee and Lee-Davis, there were be no significant travel during 5A Central Region tournament play. The Raiders are the northern most school of the fifteen proposed, while Prince George is at the southern end. Travel will come into play again at just the state level, a move which should help the financial budgets of both school's athletic departments.

--For Patrick Henry and Hanover, the proposed thirteen-team 4A Central Region will pose some travel at the region tournament level. Chancellor and Courtland are both in Spotsylvania County, King George lies to the east of there, and Eastern View poses the biggest trip, a ride to Culpeper, Eastern View is 65 miles from Patrick Henry, 78 from Hanover. The fringe counties of Louisa, Dinwiddie, Caroline and Powhatan are included as well.

Here are the next steps:

1) The VHSL Alignment Committee votes on appeals at its August 4 meeting.

2) The committee's final recommendation will move to the Executive Committee, who is currently set to vote on September 21.

But this year, if you win a conference championship, you're likely going to be able to retire the trophy. 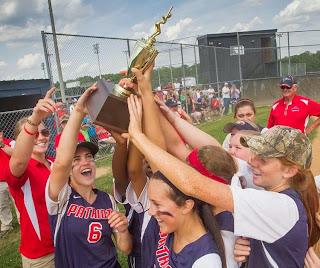 (Patrick Henry softball celebrates in May, 2015 in the 5A North Region. The Patriots would move to the 4A classification effective the 2017-18 school year in the latest realignment proposal being worked on by the VHSL.)
Posted by robwitham at 10:47 PM