BACK TO BACK: Patriots Roll To Class 4 Volleyball Title

A year ago, they arrived at the Siegel Center in downtown Richmond the surprise underdogs, the team happy to be there, the one that wasn't supposed to win. A few hours later, Patrick Henry boys volleyball completed the magic carpet ride to their first-ever state crown, and the school's first in 22 years.

They left the Siegel Center that evening the immediate heavy favorites to repeat as champions in 2017 as the school moved down from Class 5 to Class 4 in Virginia High School League (VHSL) classification, a biennial event due to enrollment changes. So, how does "the hunter" handle being "the hunted".

The word head coach Michael Townsend used to describe his Patriots, who, in his own words, did not play their best volleyball last Thursday afternoon, but it was enough to sweep Midlothian in three sets, 25-21, 25-23, 25-19, to capture the Class 1-4 State Volleyball Championship. Patrick Henry did not lose a regulation five-set match all year, ending with a composite record of 26-1, their only defeat by a two sets to one count to eventual Class 5 champion Deep Run at the Virginia Volleyball Showcase September 1st.

To complete the dominance, the Patriots went to Deep Run three weeks later and won a five-set thriller for Townsend's 100th career coaching win. Now, a little less than two months later, the team he dreamed of three years ago not only dominated their final competition, they never let you see them sweat.

Attacks came from all around the court. CW McIlhenny found holes in the Trojan defense left, right, and middle, leading Patrick Henry with 14 kills, his final kill coming on Championship Point which sent Townsend into his now tradition of "court diving" onto the floor, allowing his team to dog pile on top of him to start the title celebration.

That doesn't happen, however, without strong offense, and stout defense. Jaxon Delgado and Jarrett Carrano had eight kills each, as the Patriots had five team blocks, Delgado teaming with Adam Lane and Luke Puckett on multiple occasions. When Midlothian launched a run, the Patriots held it back.

The jitters, however, got to both teams early. The vastness of the Siegel Center, when compared to your local high school gym, and the bravado of the occasion, the opportunity, led to service errors by both the Patriots and Trojans, even into sets two and three. It was part of the Patriot performance that no one was happy with. But the team found ways to overcome them, forcing additional Trojan errors, and feeding their plethora of offensive weapons.

The bottom line from Townsend, all season long, and emphasized again on this day by his team, was a relentless pursuit of the volleyball, which sounds simple enough. But it means sacrificing your body over and over again, soaring, diving, doing anything possible by any means necessary to keep the ball from hitting the gym floor.

"There's many drills I do in practice that implement, you know, not letting the ball hit the floor, and the defense was absolutely relentless, as it has been all season," Townsend noted. "When we don't play good defense, we don't play well as a team. We played really good defense. I wish our block would have been a little better, but Midlothian has great hitters and run a great offense."

That attitude, eventually, is also meant to crack the veneer of the opposition, and, in set three, it was readily apparent that the Patriots would soon hold another trophy. After the Trojans opened the set on a 5-2 run, the Patriots bounced back, taking the lead at 8-7. Carrano would send a kill down to end an especially tight battle at the net to up the lead to 12-9. A moment later, he aced. It was 14-10. The race to 25, for the final time, was in high gear.

After a Trojan kill, Delgado powered one of his own right from the middle of the net to make it 15-11. McIlhenny hit from the left, Delgado repeated in the middle, and in the blink of an eye, it was 23-18. On Championship Point, the defense held one final time, Adam Lane sending his 30th and final Patriot assist to McIlhenny left side, who ended the season with authority, adding another state trophy to the case in Ashland.

"This is my fourth year with the team, I've been with these guys since ninth grade, and we moved up together, had a ton of fun times. It's my favorite thing I do," noted Lane after the match. "We love to play together. Playing good volleyball is what I'll miss the most."

Lane, libero Connor Logan, who had eight digs and an ace, and Luke Puckett, who had nine digs and three kills, are among seven seniors who ended their Patriot careers by hoisting another title towards the spirited Patrick Henry student section. This means Carrano, Delgado, McIlhenny, and Cal Inge will return a nucleus more than capable of allowing the Patriots to make yet another run come 2018.

For Townsend, who sat on the bench and watched Patrick Henry lose a heartbreaker to Clover Hill in the 2001 State Championship, then spent fifteen years of dreaming to bring Patrick Henry to the mountaintop, that's simply the next step in the process.

"I hope it leads to more," Townsend said when asked about the legacy of the Class of 2018. Seniors on this team will have two championships to their credit, something no one else has ever been able to say since Patrick Henry opens its doors in 1959.

"I want our school to be a volleyball school. I want 20, 30 kids trying out every year," Townsend noted. "If we have those numbers, I know I can coach those kids to get them right where these guys are right now."

The returning Patriots, and the coaching staff, left Siegel Center on this occasion happy, elated, thrilled for the seniors especially, but not totally satisfied. There is another championship available for the taking just twelve months from now, and you can be certain that the foundation for another run at the title is already being laid down Route 54. 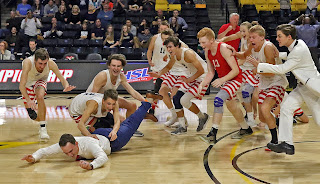 Posted by robwitham at 3:31 PM