No one's unbeaten in football anymore.....and a monster night for a running back. Here's the headlines from September 20th:

1) The Blake Stattelman Show--The junior tailback rushed for 204 yards and three touchdowns....in the FIRST HALF!  He returned to add 117 more yards and a final touchdown run to end the night with 42 carries, 321 yards, and 4 TD's, Player of the Week candidate without a doubt, as Lee-Davis beat Patrick Henry 34-14 in the 55th Tomato Bowl.  It's the Confederates' 3rd straight Tomato Bowl victory, as well as their 3rd straight win in Ashland dating back to 2009.

2) PH Finally Scores, Now What?--Their defense, again, wore down, because the offense couldn't sustain drives. Tyler Phelps was quite rusty in his return, going 2-of-13 for 11 yards, though he had two long pass attempts to Chesdin Harrington right on the money before they were knocked away by Lee-Davis defenders in one-on-one jump ball situations. The Patriots are 0-3, and 2-1 Mills Godwin comes calling next Friday. PH desperately needs #1's to emerge: a number one tailback, a number one receiver, a number one shutdown defender who leads the charge a la Jeff Thompson, Sam Smith and Adrian Cavanaugh have over the past decade. That warrior-type leader hasn't emerged for the PH defense...yet.

3) Hanover, Atlee Go Down on the Road: Hanover jumped to a 13-0 lead, then sputtered the rest of the way, while Hopewell jumped back into the game with a great 3rd quarter, taking the lead for good late and holding on for a 21-19 win. The Hawks are 2-1 and return home to facing a rested 2-1 Highland Springs team, who had a bye this week.  Highland Springs at Hanover is our Game of the Week on 102.9 FM WHAN Radio and here at HanoverCountySports.net next Friday!

Atlee discovered they didn't have the only defense in the area making huge improvements over last year. The Douglas Freeman defense held Atlee to just two touchdowns as the Rebels pulled away with a 24-14 win to go to 3-0 for the first time since the 1990's, a minimum of 15 years....the Raiders come back home next Friday to face 3-0 Henrico, whose offense can strike quickly.  Suddenly, another tough test for a Raiders squad whose offense has regressed the last two weeks after that 70-point performance on opening night.

The Raiders were without lineman Austin Cannon and wideouts Ross Gardner and Booth Watson, all out due to injuries. They probably won't be available for the Henrico game either, making it all the more important for McCoy, Dandridge, Stubbs, Carey, etc to step up their games individually if the Raiders want to be 3-1 going into Hanover week.

4) Congratulations to Travis Phillips, now a freshman at East Carolina, and Shania Williams, a Patrick Henry senior, as they received their state championship rings tonight in a pregame ceremony at the Tomato Bowl!  Phillips won the 110-meter hurdle title, Williams the women's shot put title, last spring.  Travis sent us a shot of his new hardware.... 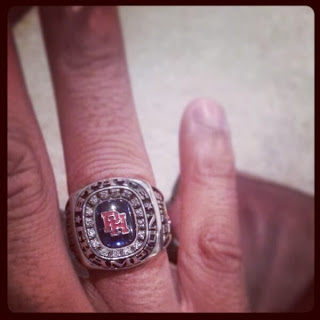 1) Sam Rogers and Virginia Tech welcome Marshall at 12noon at Lane Stadium, while Karlie Suber helps the UVa Women's Volleyball team in a weekend tourney in Charlottesville.  They'll play William & Mary at 7pm. @Hanoversports plans to be at both events on Saturday, as we work on a series for the Hanover Herald-Progress on multiple county freshmen already making their mark on the college level.

2) THANK YOU!!!!  Our halftime fundraiser for the American Heart Association's Richmond HeartWalk raised an amazing $341!!!!  CLICK HERE for all the details about the HCS Team walking next Saturday, and, if you haven't given a donation, we'd love for you to do so!  Just click the "Give Now" button!!