FIELD HOCKEY: Sophomore Sydney Baldwin had a penalty stroke goal and an assist to pace Atlee to a 3-2 win at Patrick Henry, advancing the Raiders' record to 6-2. Brooke Flexon and Ashley Samuels tallied for the Patriots, who fell to 3-4.

GIRLS VOLLEYBALL: It will go down as an Atlee 3-0 sweep of Hanover in the record books by scores of 25-16, 25-11, 25-11, but the Hawks performance at home was better than the score reflects. They led set one 13-12 before Atlee went on a 13-3 run to win it. The Raiders were more decisive in the final two sets, taking advantage of several unforced Hanover errors. Kudos to Lauren Stanford, in at libero for the injured Melanie Snyder, who contributed 10 digs, 4 assists and 3 aces. Maddie French and Kylah Blackmore each had 12 digs as Atlee improved to 8-1.  For the Hawks (6-4), Rebecca Hoover had 12 digs, 3 kills and an ace while Leila Haynesworth at 7 kills, 2 aces and 5 digs... 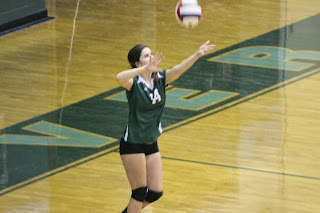 (action from the JV matchup, won in two sets by Hanover...)

GOLF: Atlee takes a victory at Queensfield today, defeating Hanover and host Lee-Davis. The Raiders shot a 161, the Hawks a 174, and the Confederates a 179. Leaders for each team were Phillip Sening, the medalist at 37, Ward Wilkinson for Hanover at 41 and Austin Diehr for L-D with a 42.

--The 55th Tomato Bowl sees Lee-Davis at Patrick Henry, two teams needing a victory to avoid starting 0-3.  LIVE coverage of the Tomato Bowl begins at 6:30pm on WHAN Radio, 102.9 FM, and online at the link at the top of this page!
--Atlee travels for the first time this year, and they get Douglas Freeman, who they lost to 49-48 on a touchdown with 3 seconds left. Both teams are 2-0 and a huge crowd is expected at William Long Stadium. Get there early for good parking.
--Hanover travels down I-295 to the site of their 2012 Division 5 Regional Championship, rematching against Hopewell. The Blue Devils lost to Powhatan last week while Hanover is 2-0, coming off victories against Patrick Henry and JR Tucker. Hopewell will be a step up in competition before the Hawks host Highland Springs next Friday.