Ryan Turnage has been named the new head football coach at Lee-Davis High School. The move was made at Tuesday night's Hanover County School Board meeting and confirmed to HCS Media Network via our partners at the Hanover Herald-Progress.

Turnage last served as a head coach at Jamestown High School in Williamsburg from 2007 to 2011, compiling a record of 26-25 and guiding the Eagles to their first-ever playoff appearance in his final season. Jamestown also made the 2013 playoffs in the new 4A classification, losing to eventual state champion Dinwiddie.

Turnage has spent the past two seasons as an assistant coach at Woodside High School in Newport News.

The new coach has Hanover ties, as he spent two seasons on Pedro Arruza's staff at Randolph-Macon during the 2005 and 2006 seasons. Turnage is married and has a six year-old son.

The Lee-Davis community will have the opportunity to meet and hear from the new coach on Thursday night at a Meet and Greet scheduled at the school's auditorium beginning at 7pm. 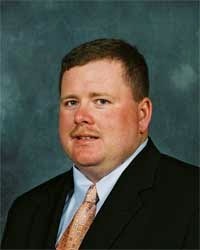 Posted by robwitham at 9:23 AM