The return of Tre Frederick netted big results, as the sophomore from Angier, North Carolina raced for 212 yards, while the Randolph-Macon defense held a highly regarded Washington and Lee running attack to just 213 yards, half of their season average, as the Yellow Jackets won at Lexington Saturday by a 18-10 score to draw themselves into a first place tie in the Old Dominion Athletic Conference (ODAC) with two weeks to play.

The teams traded field goals early, then quarterback Joe Vairo found Willie Schaub for a five-yard touchdown reception to give Randolph-Macon a 10-3 early in the second quarter. Seth Yurgel kicked field goals of 44 and 26 yards to up their lead to 16-3 at intermission. Senior Logan O'Neill stripped Washington & Lee quarterback Charlie Nelson in the end zone for a safety to increase the Randolph-Macon lead to 18-3 with 12:33 left.

But the Generals' defense put their team right back into the game as Will Dyson picked off a Vairo pass and raced 72 yards for Washington & Lee's only touchdown of the game, cutting the deficit to eight. The Generals got the ball back with 3:34 left, drove 53 yards to the Yellow Jacket 11, only to have senior defensive back Jacob Silva (Glen Allen HS) intercept a Nelson pass in the end zone to seal the victory.

Randolph-Macon, now 4-1 in ODAC play, 7-1 overall, is in a tie for first place in the conference at 4-1 with the Generals, and Shenandoah, who defeated Catholic 45-34. Randolph-Macon holds the head-to-head tiebreaker with both schools, beating the Generals Saturday, and the Hornets in their ODAC opener back on September 30th by a 24-19 count.

Senior Day is next for the Yellow Jackets Saturday when always dangerous Guilford comes to Ashland. The Quakers are 1-4 in ODAC play, 4-4 overall. Kickoff time is 1pm at Day Field.

Shown below are file photos of Randolph-Macon's interior defense, running back Tre Frederick (#12) talking to teammates on the bench, and Jacob Silva (#2) who had the game-clinching interception Saturday and a big interception in last week's victory over Catholic. 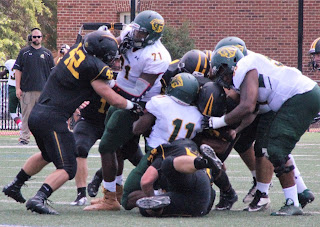 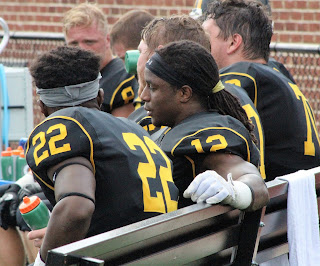 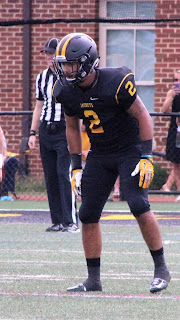