Approved Tuesday night by the Hanover County School Board, Patrick Henry High School has announced Ken Wakefield as their new head varsity football coach. Wakefield replaces Keith Braxton, who spent the last two seasons at the helm in Ashland. The Patriots were 3-6 in 2018, missing the playoffs for the first time in three seasons.

The Patriots will formally introduce Wakefield, who spent the past six seasons as head coach at Culpeper County High School, leading them to the Class 3 State Semifinals in 2018, on Thursday at 4pm at the school.

Here is the official announcement from Patrick Henry Athletics, who also provide the photo:


Patrick Henry High School is pleased to announce the hiring of Ken Wakefield as our new head football coach. We’re very excited to welcome Coach Wakefield to PHHS, and we know he is going to continue to take the program in a positive direction. He has a proven record of success, and we know he will be an excellent role model for our students, staff, and community. Please join us in the PHHS library on Thursday, March 14 at 4:00 p.m. to meet Coach Wakefield and welcome him to the PHamily.
Coach Wakefield has coached football for 22 seasons. Most recently, he spent the last six seasons as the Head Football Coach for Culpeper County High School. After a 0-10 record in the program prior to his arrival in 2013, Culpeper student-athletes consistently improved under Coach Wakefield’s ‘Embrace the Process’ motto. The program advanced to the playoffs in five of its six seasons, and the team became district champions during the 2017 and 2018 seasons. Last year was the most successful season at Culpeper as the team advanced to the 3A state semi-final game but lost to Phoebus. Despite this loss, the program was recognized for its accomplishments. Two student-athletes were named the offensive and defensive players of the year for 3B region while 14 players were named all-region in various positions. Additionally, four of the 14 players were recognized as all-state in various positions while Coach Wakefield was named Coach of the Year for the Northwestern District and 3B Region.
Prior to joining Culpeper, he was a defensive backs coach for two seasons at Marietta High School located in Marietta, Georgia. In 2010, he was a cornerbacks position coach with Randolph-Macon College. In 2008-2009, Coach Wakefield was the defensive coordinator at Lee-Davis High School. In 2006-2007, he was a special teams coordinator and co-defensive coordinator for Caroline High School. During the 2007 football season, he helped the Cavaliers achieve its best record in school history, and they won the district championship.
Before coming to Virginia, a majority of Coach Wakefield’s experience stems from his nine years as the secondary/wide receiver coach with St. Francis High School, a private school near Buffalo, New York where he was born and raised. His experience at St. Francis included the team winning six league championships, holding the number one ranking in Western New York during the 2003 and 2004 seasons, and holding the 22nd ranking in the nation during 2004.
Coach Wakefield graduated from the State of New York University at Brockport with a Bachelor’s degree in Physical Education and Health. He earned a Master’s degree in Sports Coaching from the United States Sports Academy. Currently, he is a Physical Education/Health teacher at Culpeper High School. He and his wife, Mary, live in Spotsylvania with their 10-year-old son, Cole. 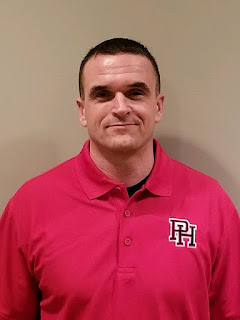