NCAA Second Round: Randolph-Macon Gets "In Zone"; Pulls Away From Spartans For Round Of 16 Berth

The York Spartans only led for two minutes, thirty-four seconds of Saturday's NCAA Division III Men's Basketball Championship Second Round game at Randolph-Macon. The most telling moments were, just, before the midway point of the second half, as a Mike Frauenheim three-pointer gave the Spartans a 49-47 lead, ending a 12-2 York run.

It was gut check time for Randolph-Macon, without senior forward and leader Jon Nowell, with senior Grayson Midulla just returning from injury. Calmly, the Yellow Jackets began finding each other. Midulla makes a putback to tie the game with 10:00 left. Korey Turner forces a steal, is fouled and makes a free throw to retake the lead.

Terry Woods (second picture below), inserted into the starting lineup for the NCAA Tournament, found the lane for a basket. Over a minute later, Buzz Anthony (first picture) nailed a triple.

You see the narrative developing. A total team effort, on both ends of the floor, was the difference, as Randolph-Macon went on a 16-0 run over a 5:50 stretch to pull away from York for a 78-60 win Saturday, sending the Yellow Jackets to their third Round of Sixteen in seven seasons, the first since 2015, and the first for both head coach Josh Merkel and his entire roster.

Tonight's seniors were high school seniors, commits to former head coach Nathan Davis, who, four years ago at this time was in the midst of leading the Yellow Jackets on a 25-game winning streak and a Round of Eight appearance. Days later, Davis left for Bucknell. Enter Josh Merkel. Three seasons of postseason frustration has been washed away in two nights of unselfish play in front of raucous home crowds. Again, a total team effort, including Nowell, coaching from the bench, still a leader.

"We've played with ten starters all year. That has never meant much to us," Merkel explained following the win, when asked about the contributions of Woods, who scored 13 points and went 5-of-6 from the free throw line down the stretch. "He's finished a bunch of games for us. He's played starter minutes. We've also coached all year not to make any game bigger than any other game."

It would be hard for anyone 18 to 22 years old not to realize the magnitude of playing when the calendar reads March. If the Yellow Jackets had any stars in their eyes, they hid them well both Friday and tonight.

It was obvious York (22-8) wanted to limit the Yellow Jackets' long-range shooting, as both Corey Bays and Luke Neeley each only made one three-pointer in a nip and tuck first half which saw the Spartans shoot 54 percent from the floor. That sent Buzz Anthony and his teammates to the paint. Anthony scored 13 of his game-high 21 points in the first half, twelve of them inside the arc. When he wasn't searching for the hoop, he was on the march for teammates, dishing eight assists, leading a Randolph-Macon assist to turnover ratio of 15-9.

Still the lead for the Yellow Jackets was only two at the half, 33-31. As was the case Friday, Randolph-Macon had a strong start to the second half, beginning on a 12-4 run in the first 2:48, capped by a Bays triple, assisted by Anthony. The Spartans regrouped, quieting the Yellow Jacket faithful with their run to take the lead midway through the half.

Merkel switched his defense to a 3-2 zone, and it completely confused York. Spartans on the floor were yelling out instructions, trying to answer the defensive change. It seemed to spark the stretch where York began to see shots which fell earlier in the game not go through the net.

"Wide open catch and shoot three? Player of the Year? I'll take that shot ten times out of ten," noted Spartan head coach Matt Hunter. "It's basketball. It's what makes this the greatest game on earth. Unfortunately, in that little sequence there, the bounces didn't go our way."

The exclamation points came from Bays, the junior sharpshooter who found his way to rim for a critical putback to put the lead at 60-49 with 5:50 to go, then nailed a triple with 4:46 left to force a Spartan timeout. The Yellow Jackets led by double digits the rest of the way.

The defensive switch was a huge factor, but just as important was the time it took for the run to develop. When York called timeout down 63-49 after the five-point Bays outburst, over half of the final ten minutes had evaporated without a point from the Spartans, making the comeback chore all the more difficult. Capital Athletic Conference Player of The Year Jason Bady, in his final York appearance, scored 16 points, while the Spartans were led by Joey Polczynski's 19.

Anthony, the Old Dominion Athletic Conference (ODAC) Player of The Year, added nine rebounds to the stat sheet, plus a steal. After Woods' 13 points, Darryl Williams had 12, including a pair of big three-pointers down the stretch. Midulla contributed five rebounds plus three points, playing almost eighteen minutes after logging eight in his return Friday.

Next for the Yellow Jackets? A bit of rest, then back to the film room to get ready for Swarthmore, who blew out MIT 105-65 in their second round game. The game will be on Friday, location and time to be announced Sunday by the NCAA.

NOTES: Bays' plus-minus for the game was 23, while Williams' was 20. The Yellow Jackets, after being outrebounded Friday, grabbed 33 rebounds Saturday to York's 27. The Spartans were limited in second chance shooting, with just six offensive boards. The Yellow Jackets are joined in the Round of Sixteen by fellow ODAC member Guilford, who defeated Wittenberg 70-61.

The next sectional includes Amherst, ranked #7 in the nation, Swarthmore, ranked #6, and fifth-ranked Randolph-Macon. Numbers were as of the final regular season Top 25 poll by d3hoops.com. Amherst will face Nichols in the other region semifinal on Friday. 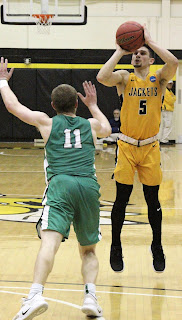 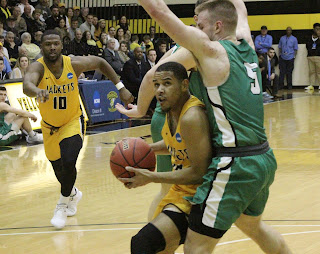