They needed two wins Saturday to make history, and they did it, both in dramatic fashion, both sharing the same final score.

Shelby Hill was the hero of Game 1 on Saturday as her game-winning hit gave Randolph-Macon a 4-3, eight inning triumph over host Christopher Newport to force a third and deciding game in the NCAA Division III Newport News Super Regional. In that game, senior pitcher Candace Whittemore kept the Captains off the scoreboard for the first six innings as the Yellow Jackets built a 4-0 lead.

A seventh inning insurance run off the bat of Savannah Wood scoring Hill proved to be the difference, as the Yellow Jackets survived a pinch-hit three run home run in the bottom of the seventh by Christopher Newport to clinch their first-ever trip to the sport's biggest stage.

Randolph-Macon (30-15) finished with a 3-2 record over Christopher Newport, who, when they came to Ashland in early April for a doubleheader, were ranked #1 in the nation. The Yellow Jackets went 5-5 overall against teams ranked atop the national Top 25 poll, going 2-3 against Old Dominion Athletic Conference rival Virginia Wesleyan, who was stunned by Lynchburg last weekend. 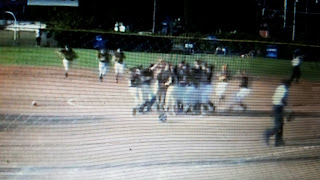 As other teams clinch bids, we will post links to articles about them below.

NOTE: Coach Proffitt and Super Regional Most Outstanding Pitcher Candace Whittemore (Patrick Henry) will be LIVE with host Rob Witham on "In The Red Zone" at SportsPage Grille Ashland this Monday night from 6-7pm only on The Mater, 102.9 FM and 1430 AM.

CLICK HERE to listen to "In The Red Zone" live online or use the @tunein radio app and listen live on "Radiall"!


NOTE: Texas Lutheran and Linfield will complete the final game of their Super Regional on Sunday afternoon due to weather. The winner will be the eighth and final participant in the Division III College World Series.
Posted by robwitham at 10:25 PM