BASEBALL: Randolph-Macon To Play VCU On Halloween At The Diamond

The following was released by Randolph-Macon Athletics on Wednesday.

ASHLAND, Va. – Before they go trick-or-treating, the Randolph-Macon baseball team will play a fall exhibition against VCU at The Diamond on Halloween.

The teams will play a 12-inning contest on Sunday, Oct. 31 at 1 p.m. The game will be open to the public with no admission charge. Gates will open at noon.

The Rams went 38-16 this past spring. They won the Atlantic 10 regular-season title and earned the right to host the conference tournament. VCU defeated Dayton 7-6 in the A-10 Championship Game and earned the league's automatic bid to the NCAA Tournament. The Rams were the No. 2 seed in the Starkville Regional. VCU defeated third-seeded Campbell in the first round before falling to eventual national champion Mississippi State in the second round. The Camels ended the Rams' season in the third round.

The Yellow Jackets went 23-11 overall this past spring and 18-4 in ODAC play. R-MC won the conference regular-season crown for the third straight season. The Yellow Jackets started the season ranked No. 2 in the nation in the D3baseball.com/NCBWA poll and No. 3 in the Perfect Game Preseason Top 25. 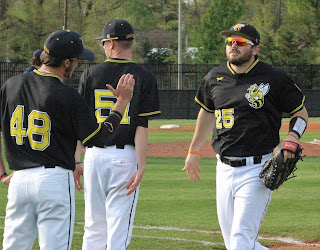 Posted by robwitham at 4:15 PM