The following was released by the Randolph-Macon Athletic Hall of Fame Committee on Thursday. Congratulations to all of the newest members!

LaHaye spent 38 seasons as head coach of the Yellow Jackets from 1982-2020 and posted a record of 647-376 with fourteen 20-win seasons. At the time of her retirement, she topped the ODAC win list. LaHaye was sixth on the active NCAA Division III wins list. She was 14th on the all-time Division III wins list and 27th on the all-time women's basketball wins list for all divisions. LaHaye led R-MC to eight ODAC regular season titles and 10 ODAC Tournament Championships. The Yellow Jackets earned 12 NCAA Tournament bids. They reached the Sweet 16 four times, the Elite Eight twice and were national runner-up in 2005. LaHaye was ODAC Coach of the Year four times and VaSID College Division State Coach of the Year five times. She was 2002-03 Richmond Times-Dispatch State Coach of the Year. LaHaye was inducted into the Mid-Coast Hall of Fame in 2010 and the University of Maine-Machias Hall of Fame in 2012.

Meleski was a four-year starter for the R-MC baseball team. He was ODAC Rookie of the Year in 2006 and was voted All-ODAC First Team at third base in 2007 and at second base in 2008. At the time of his graduation, Meleski topped the R-MC career lists with 195 hits, 556 at bats, 51 doubles, 115 RBI, 127 runs, 63 extra base hits and 273 total bases. All those marks remain in the Top 10. In the four years prior to Meleski's arrival, the Yellow Jackets were 42-88 overall and 16-54 in ODAC play. During his four-year career, R-MC went 84-65 overall and 43-29 in conference contests. During his junior season, the Yellow Jackets won their first ODAC championship since 1987 and earned their first NCAA Tournament berth since 1977.

With LaHaye at the helm, the 2004-05 R-MC women's basketball team set an ODAC and program record with 30 wins and went a perfect 20-0 in ODAC contests, also a conference record. The Yellow Jackets defeated Washington and Lee in the quarterfinals of the ODAC Tournament in Salem, pulled out a 68-64 victory over Emory & Henry in the semifinals and posted a 72-55 win over Bridgewater in the title game. R-MC earned a bye in the first round of the NCAA Tournament and topped Mary Washington 89-76 in Crenshaw Gym in the second round. The Yellow Jackets would host a pair of Sweet 16 contests, outlasting Trinity (Tex.) 82-79 in overtime in the Sweet 16 game and defeating George Fox 63-51 in the Elite Eight matchup to advance to the Final Four for the first time in program history. R-MC would head to Virginia Beach, as Virginia Wesleyan hosted the Final Four in 2005. The Yellow Jackets defeated Scranton 70-65 in the National Semifinals before falling to Millikin in the National Championship contest. 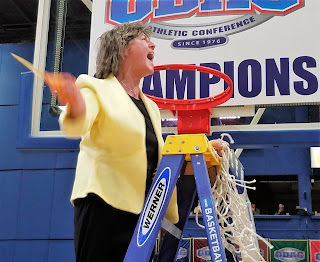 Posted by robwitham at 4:24 PM