We're live from Lee-Davis High School Thursday at 2:30pm for 3rd Place and Championship action at The Southerner Classic! Here's the lineup of games:

Key three-pointers and free throws for freshman Julia Mardigian help to lead Hanover to the 2017 Lady Cavs Holiday Classic Tournament Championship Wednesday night with a 46-35 win over previously unbeaten Powhatan. The Hawks, 4-2, play next week in a tournament at Park View High School in Sterling. 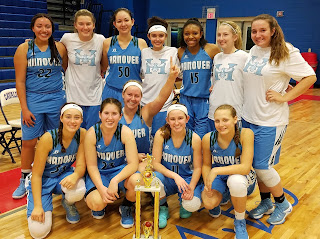 Posted by robwitham at 11:07 PM No comments:

Congratulations to the following student-athletes for being named to the 2017 Class 4 Boys All-State Volleyball Team by the Virginia High School League (VHSL). County honorees are denoted in bold. 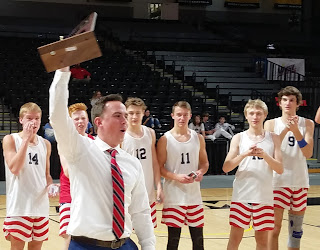 Posted by robwitham at 11:56 AM No comments:

This article originally appeared in the November 30th edition of The Herald Progress.


This is the week when high school swimmers join the swimmers at Randolph-Macon diving into the 2017-18 season, with a plethora of talented performers across all four high schools as well as with the Yellow Jackets, who get ready to host their annual Yellow Jacket Invitational on Friday and Saturday at SwimRVA in Chesterfield.

On the scholastic level, perhaps there's no more intrigue than at Hanover, a program that has enjoyed a rather meteoric rise the past few seasons, with their boys team taking runner-up honors in the final Group 4A State Championship last February. Head Coach George Massey begins his fourth year at the helm needing to replace the likes of Seth Gulas, Delaney Kassab and Jonathan Moss on the boys' side, plus longtime Hawk stalwart Mattie Grant. But Massey has forty swimmers returning to action from last season, and they're poised to make more noise in the now Class 4.

"Technique, kicking, team camaraderie and respect," Massey noted when asked about the keys to Hanover's success this year, a quirky but totally understandable combination. For the boys, the team turns to Patrick Townsend, a high school All-American in the 100 Backstroke who placed second in the state tournament last year, plus fifth in the 200 Individual Medley. Townsend signed to swim for the University of Tennessee earlier this month.

Seniors Ross Newton and Marshall Brooks return, plus look for contributions from sophomores Luke Daley and Jack Hufner. For the girls, Hanover turns to senior Ellie Sherry, who signed with Southern Connecticut State, and look for an injury-free season from junior Claire Grant, who Massey said is "ready to break out." The newcomer to watch is freshman Natalie Culley.

Traditionally the power school in the county, Atlee turns the page from the Olivia Fisher era, now at North Carolina State, but head coach Karen Seeber has plenty of firepower back. The ladies begin with Sonora Baker, who has committed to the College of William and Mary and is a USA Swimming Scholastic All-American.

Joined by the likes of Emily Devlin, Jessica and Jaelyn Jones, Campbell Whyte, and Ashley and Amber Zicafoose, the Raiders look to be strong contenders in the new Region 5B, which became much more competitive when Henrico County schools like Deep Run and Mills Godwin became Virginia High School League (VHSL) recognized last year. Depth, normally a Raider specialty, will be an important factor as to how far Atlee can go come February.

On the boys side, Logan Amatruda returns to lead a group that should turn some heads, including Ryan and John Duegaw, Dylan Miller, Andrew Mudd and Caleb Oliver.

"We are a young team. We have twenty first-time high school swimmers on our squad," Seeber notes. "That begin said, our major focus is on our student leaders, both captains and non-captains, empowering them to step forward and embrace these first timers as they acclimate to our program."

Lee-Davis is another team moving on from one of the best swimmers in school history, as Molly Sheffield now studies and competes at Virginia Tech. But the tandem of senior Lacey Kramer and junior Sara Gaston are ready to take the spotlight and keep the Confederates moving forward.

The leaders on the boys team include senior Ryan Griffiths, juniors Brendan Farrar and Aidan Rice, and sophomores Aidan Langford and Collin Marks.

Patrick Henry, now with Hanover in Region 4B, return Ben Schubert, Paul Datovech, Blake Boschen and Baxter Dingman on the boys team, plus Shelby Nash, Madison Evko, Kayla Maxey and Chloe Rada on the girls side. The Patriots open their home schedule on Friday December 8th, hosting Colonial Heights at the Ashland YMCA.

Atlee and Lee-Davis are scheduled to join host Hanover at the third Hanover Hawk Holiday Invitational on December 16th at SwimRVA, the home of the Yellow Jacket Invitational this weekend, hosted by Randolph-Macon.

For the Yellow Jackets, this weekend will conclude the 2017 portion of their schedule for both the men and women. Both will not return to action again until January 13th when they face York and Frostburg State in York, Pennsylvania. The men are coming off their second win of the season, 129-73 over Marymount on November 18th, as both Ivan Fadeyev and Victor Kontopanos each scored three victories in the meet for the Yellow Jackets.

The women scored their first head-to-head victory of the year with a 129-75 win over the Saints. Junior Kata Kyllainen won three events, the 100 Freestyle, the 500 Freestyle, and a 200 Free Relay victory along with Kacey Pool, Lauren McCoy and Megan Granger. Laney Sanchez, a sophomore from nearby Midlothian, was victorious in the 200 Individual Medley in a time of 2:21.47.
Posted by robwitham at 1:44 PM No comments: