The first month of 2013 ended Thursday with a hot night of hoops action at Atlee as the Raiders welcomed in the Hanover Hawks for boys JV, girls varsity, and boys varsity games.

After the Atlee boys held serve at home with a 51-37 win over the Hawks, the girls took center stage on Senior Night for Atlee's Stephanie Staples and Nikki Gordon.

Gordon had two points in the fourth, Staples added 13, but it was Cierra Shelton with 22 points who drove the Atlee engine to a 60-47 Capital District win over Hanover.

Hanover took the early lead on a three from Amber Norris and led after a quarter 9-8. The Raiders fought basket for basket through the second until the Hawks broke at 17-17 tie on a Sarah Belcher field goal and free throws by Haleigh Omohundro and April Lankford for a 21-17 halftime edge.

Hanover extended the lead to seven early in the third, but a seven-point run by the Raiders, capped off by a Shelton trey, tied the game at 26. Norris responded with a traditional three-point play with 4:14 to go for a 29-26 lead.

Staples hit a three. Add another Atlee basket and a missed front end of a one-and-one by Norris and the third quarter ended with Hanover ahead 36-35.

Staples hit a two to start the fourth, taking the lead for Atlee for good. Jamari Blackwell's two off an inbounds pass continued the run, and, by the time it finally ended with a Norris free throw with 4:08 to play, the lead was 15 at 52-37.

Another eight for the Raiders pushed it to 60-37 with 3:07 left. In six minutes, Atlee had outscored Hanover by an amazing 30-1.

The Hawks hit some baskets and free throws in the final minutes to cut the lead but the outcome was no longer in doubt.

The boys varsity game saved the best action for last.

Atlee got off to the hot start, hitting 3 from behind the arc for an early 9-2 lead, but the Hawks were patient, whittled down the lead, cutting it to 13-12 after a quarter.

Back and forth they went through the second fighting for the lead. With the score tied at 31, Trayvonte Brown, affectionately known by Hawk Nation as "TBIII", drove the lane and hit a floater at the buzzer to give Hanover the 33-31 halftime lead. Brown led Hanover in scoring with 15 points.

Atlee spent much of the third quarter playing catch-up, as Hanover built leads of 5 and 9 respectively during the frame. The Raiders cut the 9-point lead to four in the final minute before two Hawk baskets put their lead back at eight at 57-49 after 3.

Atlee started the fourth with a quick 5-0 run and the lead was never more than four for anyone. But, in the end, missed free throws spelled doom down the stretch for the Raiders.

Here's the timeline, beginning with 5:17 to play in the contest:

--Quincy Randolph missed the front end of a one-and-one when Hanover led 59-57.
--Atlee got a defensive stop, Brian Miller was fouled, but he made just 1 of 2 free throws. It's 59-58 Hanover at 4:34 and the Hawks called time.
--Jalen Elliott drove to the hoop off the timeout, scored and drew the fourth foul on Rashaun Winters. But, Elliott, too missed his free throw due to a lane violation (his shot was actually good), keeping the lead at one possession at 61-58.
--Quincy Randolph's three-pointer w/3:09 to go gave Atlee its final lead at 63-61. The Hawks responded with a 4-0 run.
--Miller missed two free throws with 2:15 to play when the Raiders were down 2 at 65-63.
--The Hawks made a field goal to extend the lead to four again, then Winters drove the lane for a hoop and drew a foul w/1:23 to go. Winters, though, missed the chance at the traditional three-point play by missing his free throw and it was Hanover 67-65.
--Winters would, on the next possession, get a steal, fire the ball to Miller, who got the hoop and harm, fouled by Elliott.  With 55.5 to go, Miller approached the line with one free throw to take the lead.

--He missed. It remained 67-67. As Hanover came downcourt, Randolph forced a steal, saw Miller streaking toward the bucket, but overthrew him.  We were still tied, Hanover gets the ball back.

--The freshman, Elliott, makes the most of it by drawing a foul and, while the Atlee student section screamed their heads off, he calmly sank the first of two free throws for the 68-67 lead.  Then he promptly missed the second shot, Winters rebounded, and the final sequence of events began.

As Atlee looked for a shot to take the lead, a held ball occurred on the floor with 12.7 seconds left. The possession arrow favored Hanover. On the Hawks inbounds pass, the fight for the ball ended in one Raider down in pain, a missed foul call, and another held ball, giving possession to Atlee at 8.2 seconds to go.

Brett Ayer, the sophomore who hit five three-pointers on the night (he didn't miss any attempts, either) got knocked to the floor hard by a Hawk and withered in pain at halfcourt. No whistle.  There could have been and it would have been justified.

But that didn't seal Atlee's doom.  Their earlier poor free throw shooting, and a key play by Donte Haynesworth were responsible for the final nail in the coffin.

On the inbounds pass at 8.2 seconds, Haynesworth went for the second pass of the possession. While not able to steal the ball, he did knock it out of bounds, further downcourt, and took five seconds off the clock in the process.

Now Atlee had to inbounds 60 feet from the basket with 3.2 seconds left.  The ball got into the hands of Mac Gray who, as you see below, went down the sideline and launched a game-winning three point attempt with 1.3 seconds to go.  It was too long, and Hanover had survived in the Rage Cage. 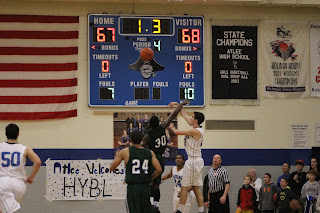 Brian Miller led in scoring for the Raiders with 18, followed by Quincy Randolph with 16 and Ayer with his 15.  Rashaun Winters had 14 rebounds, nine of them in the first half, seven blocks and a steal.

After Brown's 15 for Hanover, Haynesworth and Elliott each added 10 points while Jordan Wade had 9 points and 9 rebounds.  Haynesworth's biggest contributions were his seven steals and knockaway in the final 10 seconds to help force Atlee into a tough last shot.

The Hawks improve to 5-4 in the Capital, 9-4 overall as they begin a brutal stretch of games. Friday night they host Capital District leader Henrico at 7:30. The Hawks lost to Henrico 99-66 a few weeks ago.  The Hawks welcome Armstrong to Hanover for a 3:30 game on Saturday. Then Hanover travels to Glen Allen Monday night and Highland Springs Tuesday night.

Atlee falls to 1-8 in the Capital, 3-14 overall, and next battle #2 in the district Armstrong at home Friday at 7:30, followed by trips to Varina Monday and to Lee-Davis Tuesday before hosting Henrico Wednesday.  Those Varina and Henrico games are makeups from the January weather disruptions.

Atlee's Senior Night for boys may be tomorrow against Armstrong, which was their regularly scheduled final home game, but may be moved to Wednesday's game versus Henrico......

AS ALWAYS: Follow us on Twitter (@hanoversports) for 24/7 updates on ALL things going on in Hanover County....sports, weather, school closings, interesting hashtags, and who knows what else! 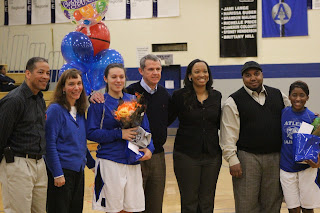 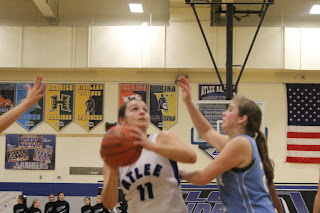 1) Stephanie Staples (3rd from left) and Nikki Gordon (far right) were honored before the game on Senior Night for the girls basketball team.

2) Staples drives for two during her last game in a varsity uniform for the Raiders.....