Friday Highlights: PH Loses Finale, is #3 Seed in Tourney; Atlee's Staples gets to 1,000

There just wasn't enough in the tank for Patrick Henry.

Playing their third game in three nights, with Tyler Pinder out due to injury and Summer Price still not 100 percent after an illness forced her to miss Wednesday's night game, Patrick Henry fell at Deep Run 49-39 to complete their regular season at 13-3 in the Colonial, 17-5 overall.

The real nemesis on Friday night was turnovers.  The Patriots had 25 of them and, by our count, only attempted 15 shots from the floor in the second half, both numbers indicative of a team not getting nearly enough regular offense generated to secure a win.

Summer Price scored 16 while Amber Lee added 14 points and 16 boards. Price is now at 993 career points at Patrick Henry, and can reach the 1,000 point barrier when Patrick Henry hosts a first round Colonial District Tournament game on Tuesday.

The Patriots finished in a second-place tie with Deep Run at 13-3 (Mills Godwin won the regular season title at 14-2), but, by virtue of Deep Run sweeping the District games against PH, Deep Run will be the #2 seed. You'll recall Patrick Henry's win over Deep Run in December was a non-district game in the Times-Dispatch Invitational Tournament. 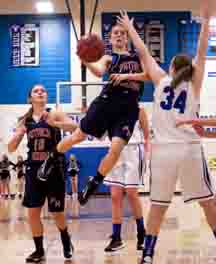 Meanwhile, congratulations to Atlee senior Stephanie Staples, who reached the 1,000 point mark as a Raider in Friday night's regular season finale, a 68-52 loss to Capital District regular season champion Highland Springs.  Atlee will enter the Capital tournament Tuesday as the #4 seed, ensuring them a first-round home game, time and opponent TBD.....
Posted by robwitham at 5:11 AM