Always the bridesmaid, never the bride.

The Lee-Davis Confederates girls volleyball team are headed to the 5A State Championship Tournament by virtue of their four-set victory Wednesday night over Mills Godwin, their third win of the season over the Eagles, in the 5A South Region Semifinals at Meadowbrook High School.

It was a team effort, with Kendyll Brown setting the pace early in the middle, Rachel Gaston and Jordan Martin making their mark on the outside later after the Confederates lost their first set to the Eagles all season in set two, 25-20.

Martin told RVA Sports Network her team took the Eagles too lightly after the 25-14 set one victory, and turned up the intensity in set 3, retaking the lead with a dominant performance winning 25-11.

Then the Confederates withstood one final push by Godwin late in set four to win the match, and the berth in Tuesday's 5A State Semifinals. Lee-Davis will host the match if they win the 5A South Region Championship Thursday at 5pm against Princess Anne. If they lose, they would travel on Tuesday night. 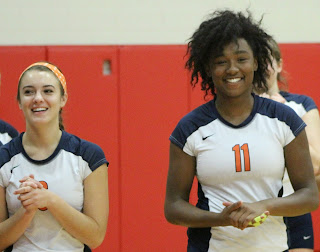