FOOTBALL: Randolph-Macon To 3-0, But A Ways To Go

The final scores, on the surface, are impressive.

But dig just underneath the surface of Randolph-Macon football's 3-0 start, and you will see, as head coach Pedro Arruza does, a team still learning to execute, and learning to win.

The Yellow Jackets enjoyed a strong performance offensively in the first half, as Tre Frederick, Eric Hoy and Dom Kaopua all scored on short touchdown runs. But another extra point attempt was missed, the third in as many games. The defense allowed a late Methodist touchdown with 31 seconds to halftime, making a 20-3 lead just 20-10.

In the second half, an interception from Joe Vairo (15-of-24, 252 yards, 1 TD, 1 INT) and two critical fumbles by Frederick inside the Methodist ten-yard line, ending potential touchdown drives, kept the Monarchs in the contest. But the defense did enough, and the offense reignited, scoring two fourth quarter touchdowns to secure the first 3-0 start, and non-conference sweep, for Randolph-Macon in five years.

"I haven't looked at the film, but it's pretty disappointing," Arruza noted in his office after the game, addressing his players in the locker room beforehand to express his feelings. "We'd better improve a lot, or it's going to catch up to us."

Arruza listed several goals that were handed out in practice last Monday, and each of them, from pursuit angles to holding onto the football, were issues for the Yellow Jackets.

And, while Randolph-Macon's defense only allowed 42 yards of rushing, they were torched for 356 passing yards, 82 of them on a touchdown by Methodist with just over a minute to go. Monarchs quarterback Xavier Adams, given time in the pocket, and, other times buying time via the scramble, completed 24 of 44 passes for 356 yards, two touchdowns, but a key second half interception on a pass tipped by JP Redmond and hauled in by Eric Long.

Adams attacked the secondary given the Yellow Jackets' defensive line's inability to get to the quarterback consistently like they did in three quarters last Saturday in the 44-10 win over Averett.

Catholic and Randolph-Macon have ended their non-conference schedules at 3-0. Surprisingly, Hampden-Sydney, picked second in the Old Dominion Athletic Conference (ODAC) preseason poll behind defending champion Washington and Lee, is 0-3. The Generals themselves are struggling, falling late to Claremont-Mudd-Scripps Saturday evening 31-28 to fall to 1-2.

There is no doubt the Tigers, Generals, and others, will right their ships. Everyone is 0-0 in conference play. The door of opportunity is there for Randolph-Macon, picked to finish fifth overall.

But the Yellow Jackets must quickly fix the problems that are there, before, as Arruza says, they catch up with them.

Randolph-Macon is off next Saturday, then begins ODAC play with a Thursday night game at Shenandoah (2-1) on September 29th. The Yellow Jackets return to Day Field for Family Weekend October 8th against Bridgewater (1-2) at 1pm.

(Pictured Below: Dom Kaopua (#26) scores the first of his two touchdowns, while Eric Hoy (#24), who had six catches for 133 yards, just misses on a long pass attempt in the second quarter.) 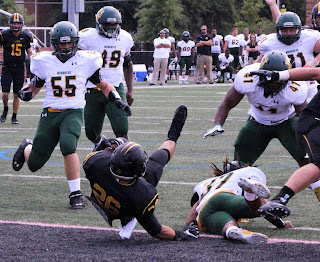 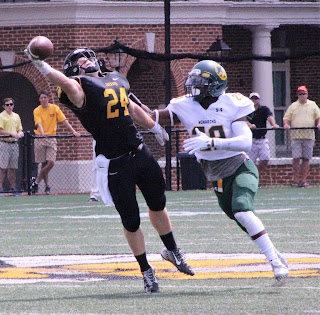 Posted by robwitham at 7:56 PM