The Wrap: Young Hawks Growing Up: Knock Off Patrick Henry

Hanover catcher Lauren Hughes wondered what all the fuss was about after the third out of the top of the seventh inning Thursday night at home as her Hawks battled county rival, and new Region 4B rival, Patrick Henry.

"Actually, when the girl got out in the last inning, I had no idea it was the last out. I was like, why is everyone so excited? We've got one more inning to go, guys!," Hughes recalled. "And then everyone started lining up and I was like, 'oh my gosh, it's time to go!'"

Hughes was laser focused on guiding freshman pitcher Leslie Currie, who entered in relief of Ellen Palya, in the sixth inning of a 2-2 tie, through a seventh inning that saw Hanover enjoyed a 3-2 lead. When Hughes noticed the scoreboard, she realized it was now a 3-2 victory, a huge win for a young Hawks team left behind a year ago by Atlee, Lee-Davis and Patrick Henry as they all made deep postseason runs, Atlee the deepest of all.

It was Hughes who scored the winning run in the bottom of the sixth off Patrick Henry freshman Riley Dull, who entered in relief of Charlotte Mitchell in the third inning. Hughes singled up the middle, moved to second on a passed ball, then to third on a Palya ground out to shortstop. After Julia Mardigian hit a liner back to Dull for the second out, Jenna Ways came to the plate. A Dull pitch got away from Emma Keys behind the plate and Hughes raced home to break the tie and return the lead to the Hawks.

Currie retired the Patriots (5-1) in order in the seventh to complete a victory that marks the return of Hanover softball to main stage after an up and down 8-9 season a year ago. What's most impressive is this is happening with a youth-laden squad. And, for second year head coach Becca Mayhew, coming into the 2018 season, the first focus was all about the mental game.

"I think the biggest thing is confidence and leadership, they go hand in hand," Mayhew said. "Our coaches have to show confidence in our players and leadership, so our captains have a lot of leeway, and they're able to trickle that down and give the girls more confidence."

The Hawks struck first in the second inning, taking advantage of a third strike passed ball to Bella Pastore with two outs. Rylan Hubbard launched a double to the right field wall that brought Pastore all the way home for a 1-0 lead. Jessica Russell next singled up the middle, scoring Hubbard to make it 2-0.

Palya went five innings, but was touched up in the fifth frame as Erin White led off with a towering home run to left field to get Patrick Henry on the board. Jamie Hughes walked, then, on a sacrifice bunt by Dull, Hughes got the green light to not only take second, but head to third base, too. It caught Hanover by surprise. Pastore's throw from first to third base was high, allowing Hughes to take off and slide in safely at home to tie the game at 2-2.

"It definitely caught us off guard, but the thing I focused on was how we bounced back. We never gave up," Mayhew noted. "We're in the dugout, and someone said, girls, it's 2-2, let's go. We're still in this. I think that was a big mentality shift for us because, before, it would be like, we're not winning anymore, and the mentality would go straight down. But not today."

For the Patriots, the end of a busy stretch of games going into Spring Break hits a sour note, as they know there were opportunities to grab the win. But a loss in an evenly played game against a future playoff rival could be just the elixir Patrick Henry needs, to refocus, regroup, and prepare for April, which sees trips to #5 Lee-Davis April 13th, King George April 18th, then finally returning home to host #4 Atlee on April 20th. Their rematch with Hanover is in Ashland on April 27th.

As for the Hawks, who have to hope Spring Break doesn't break their early season mojo, they return to action at Highland Springs April 10th. They get Atlee on April 13th at home. Hughes has enjoyed being the underdog team coming into this season.

"We are a very young team and I feel like we get underestimated because of that," Hughes explained. "We've worked hard in the offseason. We work hard on the field. We use that to light a fire under us."

The good news for Hanover is it has worked, and helped them finish unbeaten in March. The bad news is, Hanover softball is a secret no more.

In other action, #5 Lee-Davis and #4 Atlee went to extra innings before the Confederates scored two runs in the eighth inning and made them stick as Lee-Davis finally earned a win over their biggest rivals 2-0 Thursday night in their first meeting since the 2017 Group 5A State Championship last June, won by Atlee 1-0. 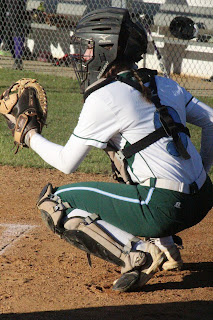