Randolph-Macon sophomore center Kelly Williams has received multiple postseason accolades ahead of the announcement of the NCAA Division III National Women's Basketball Player of The Year.

Earlier this week, Williams was named South Region Player of The Year by D3hoops.com. She will be eligible for their All-American team, which will be announced soon.

Williams leads the NCAA in points per game at 25.4, is second in rebounds at 18.2, and tops the nation with 28 double-doubles in 29 games. She also set Old Dominion Athletic Conference (ODAC) Tournament Championship records for most points (79) and most rebounds (60) during a single tournament as the Yellow Jackets won the 2018 title on February 25. 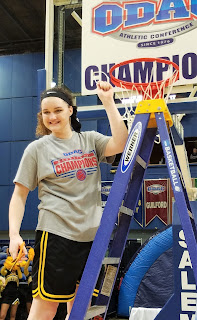 Posted by robwitham at 2:01 PM