Katie Anderson (Patrick Henry) became the Old Dominion Athletic Conference's all-time rebounding champion Monday night, pulling down seventeen rebounds to go with 29 points as Randolph-Macon pulled away from Shenandoah in the second half with a 78-53 victory Monday night in the ODAC Tournament First Round at Crenshaw Gymnasium

Anderson, who registered her 18th double-double of the season in the win, now has 1,049 career rebounds, besting the old conference mark of 1,046 held by Jessica Hunsinger of Washington and Lee, who played from 2003-2007.

The senior from Beaverdam also tied the ODAC Tournament record for most field goals in one game with fourteen. Khajae Hester had six assists for the Yellow Jackets, and now is tied for third all-time in Randolph-Macon history with 412, one shy of second place. 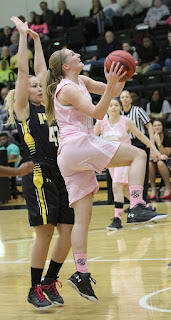 Posted by robwitham at 1:34 AM