ATLANTA – Randolph-Macon senior Kelly Williams is on the cusp of becoming a Women's Basketball Coaches Association All-Star, it was announced Tuesday morning. But the Garysburg, N.C. native, needs your help! Williams is one of five nominees for two remaining positions on the All-Star teams that will be voted on by fans.

Williams will exit Randolph-Macon with a host of records, including for most career rebounds in the Old Dominion Athletic Conference record books, as well as second in scoring in Randolph-Macon history. She had the second-most double-doubles in Division III Women's Basketball this season, finishing with 22 on the year. She was the ODAC Player of the Year and the ODAC/Farm Bureau Scholar-Athlete of the Year.

Outside of the two fan-selected All-Stars, the other 18 All-Stars were chosen by a committee of head women's basketball head coaches. Voting is now open. Click here to access your all-star ballot. Fan voting ends at noon ET, Sunday, March 15. The final list of all-stars and team rosters will be announced Monday, March 16.
The second annual Beyond Sports Women's Collegiate All-Star Game will be played at the Capital Center Performance Arena on the campus of Capital University in Columbus, Ohio, on March 21 immediately preceding the NCAA Division III women's basketball national championship game. Tipoff is set for 5 p.m. ET. 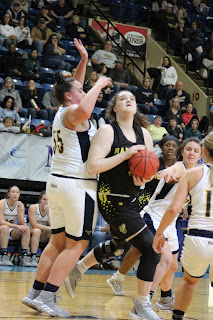 Posted by robwitham at 1:53 PM


If you need Virtual Assistant Services, then you
can read this helpful article: https://prosoftwarecompany.com/services/