Division III: ODAC Hopeful, Centennial Calls It Off For Fall

The Centennial Conference, whose members include Johns Hopkins, Muhlenberg, and Dickinson, announced Tuesday that their 2020 football season will not be held in the fall, but held out for the possibility of spring play in 2021.
Randolph-Macon football was supposed to open their 2020 season September 5th at home against Dickinson. That game was postponed last week when the Old Dominion Athletic Conference (ODAC) announced no fall sports could begin regular season play before September 11th, and now is likely canceled.
At this time, there is no word on whether the football season would now begin September 12th when the Yellow Jackets are scheduled to play at Catholic University in Washington, D.C. An issue would be the feasibility to be able to have enough practices, and possibly a scrimmage, safely ahead of the September 12th date.
The Yellow Jackets are scheduled to begin ODAC play on September 19th at Emory and Henry.
Meanwhile, men's soccer's Labor Day Weekend season opening home doubleheader on September 5th and 6th is postponed, as is women's soccer's first four contests, including a scheduled home opener with Mary Washington September 9th. Women's volleyball has five matches slated prior to the 11th, and are scheduled to be in Lexington on the 11th for matches on that Friday and Saturday. Field Hockey will have their first four matches postponed, all scheduled between September 1st and 9th.
You can track updates on schools and conferences across Division III Football as to their status for 2020 at the link below from our friends at D3Football.com by clicking HERE. 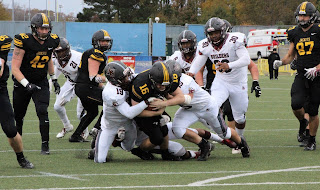 Posted by robwitham at 6:53 PM