In case you missed it, this past weekend was incredibly successful for Randolph-Macon College athletics, and it all happened on the road.

We begin with men's basketball, who repeated as Old Dominion Athletic Conference (ODAC) regular season champions thanks to an 87-45 victory at Randolph on Saturday evening. As has been the case recently, a senior led the way at a critical time, as Darryl Williams sparked a 17-0 early second half run with ten of those points to help the Yellow Jackets move to 14-1 in ODAC play, 22-2 overall.

After starting the season 10-0, Randolph-Macon has now put together a nine-game winning streak and can match ten in a row with a victory Saturday in their regular season finale at Eastern Mennonite.

Buzz Anthony, who should get major ODAC Player Of The Year consideration, led the way Saturday with 21 points, while senior Grayson Midulla (pictured) sizzled with eleven points and ten big assists. 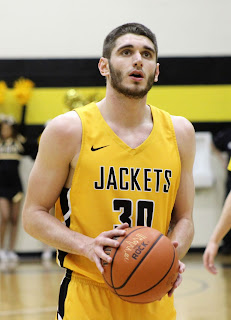 *****
Meanwhile, the women's basketball team erased the damage of a four-game ODAC losing streak by winning their fourth straight conference game, 61-52 at Roanoke Saturday thanks to a big finish on defense, holding the Maroons to just eight points in the fourth period. The win also clinched a bye in the ODAC Championship which begins next week.

Randolph-Macon (11-5 ODAC, 16-7) forced 21 Roanoke turnovers and got 27 points from the bench in the win. Michal Ross continued her strong play with 17 points in 28 minutes, while Kelsey Wisner scored eleven and Charlotte Ross, despite foul issues, had nine points and eight rebounds.

The victory keeps Randolph-Macon in a three-way tie for third place in the ODAC with Washington and Lee and Lynchburg. Guilford has clinched the regular season crown at 15-2, while Emory and Henry is second at 13-3. The Yellow Jackets host Shenandoah Tuesday, then host Guilford for Senior Day on Saturday.

*****
Men's lacrosse opened the 2019 season on a high note, winning 11-4 at Methodist University in Fayetteville, North Carolina Saturday afternoon. Hanover High School grad Colin DiSesa, a junior, led the Yellow Jackets with three goals and an assist, while eight other players each scored a goal in the victory. Randolph-Macon holds their home opener Saturday hosting Catholic at 12pm.

Critical to their success Saturday was domination in face-offs, winning 13 of 18 in the contest.

*****
Men's volleyball registered their first-ever Centennial Volleyball Conference victory on Friday night, sweeping Neumann 3-0, then heading to Cairn Saturday for a four-set victory to make it a 2-0 start in CVC play.

Local players shined as Lee Olenyik (Hanover) led the Yellow Jackets in kills in both matches with 17 on Friday and 16 on Saturday, while Connor Logan (Patrick Henry) led in digs with 12 and 19 recorded in the two wins respectively.

The first home match in program history is set for this Friday night at 7:30, hosting Immaculata. Saturday, the Yellow Jackets host Ramapo at 10am, then Bluefield College at 2pm. The matches with Immaculata and Ramapo are both CVC matches.