Randolph-Macon goes on a 13-0 run in last 5:45, including five straight points from Corey Bays for 63-49 lead, 4:45 left. Video of Bays' first basket on @hanoversports on Twitter right now.

After making just their third trey of the game, the Spartans miss two straight, now 3-of-12 from downtown, Yellow Jackets can't convert, thanks to two turnovers. 47-44 Randolph-Macon, 11:49 remaining.

Randolph-Macon leads 47-41, 13:55 left, media timeout, 6-for-9 from the field in the second half now. Buzz Anthony picks up second foul going into the break. Yellow Jackets, outrebounded last night, lead in that department 19-17, only two offensive boards so far for the Spartans.

The Yellow Jackets go 5-for-5 in first five possessions of second half to up lead to 45-37, as Neeley and Bays both hit triples in the first three plus minutes of the second half. 16:37 to go.


AT THE HALF: RANDOLPH-MACON 33, YORK 31: A Buzz Anthony shot that went in at the buzzer was initially ruled good, then waved off. He leads the Yellow Jackets with 13 points, 3 assists and 5 rebounds. Randolph-Macon shoots 43 percent from the field, only 3 of 10 from beyond the arc. The Spartans are limiting opportunities from outside for Corey Bays (1-2, 3 points) and Luke Neeley (1-2, 3 points). The Bays three-pointer came off an inbounds pass with one second left on the shot clock to retake the lead at 29-28. Anthony played all 20 minutes in the first half. Jason Bady and Joey Polczynski each have ten points for the Spartans. 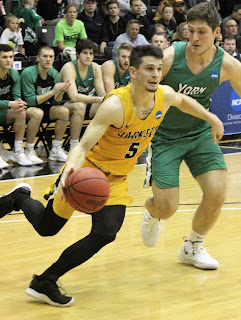 What Coach Merkel stressed could not happen did as York goes on 6-0 run, including back to back baskets within five seconds after steal on inbounds pass. Timeout Randolph-Macon, now in a 26-26 tie, 7:05 to the half.

Buzz Anthony takes the roof off Crenshaw with a juke move leaving a York defender in his wake. Yellow Jackets lead 21-15 at the under 12 timeout, 10:56 left. Anthony leads with 9 points on 3-4 shooting, plus three assists. Six different players have scored, including David Funderburg and Ian Robertson off the bench.

Torrid pace so far, everything running through Jason Bady offensively for York. Luke Neeley's three, the team's first of the night, makes it 10-9 Yellow Jackets at the under 16 timeout, 15:43 left.


STARTERS: Buzz Anthony, Corey Bays, Luke Neeley, Terry Woods and Darryl Williams. Anthony and Williams are the only Yellow Jackets to be in the starting lineup for all 30 games so far this season.


PREGAME NOTES: Randolph-Macon enters tonight at 26-3, coming off a 95-70 win over Morrisville State (NY) last night where the Yellow Jackets made 11 of 27 three-point attempts. York, the runner-up in the CAC behind Christopher Newport, led dominantly from start to finish in their first round win over DeSales, making 14 of 27 from beyond the arc.

Grayson Midulla made his return to action after missing the ODAC Championship with an injury last week, playing eight minutes. We expect to see a bit more of him tonight. Jon Nowell is not available due to the injury suffered during last Sunday's ODAC final against Guilford.

Randolph-Macon is 11-0 at home this season and is 3-0 all-time against the Spartans, winning twice during the 1970-71 campaign, and in the championship of the R-MC Coaches Classic in December, 2016. Head Coach Josh Merkel earned his first NCAA Championship victory as head coach of the Yellow Jackets with Friday's win, and seeks his 74th win with Randolph-Macon tonight and his 140th victory overall as a head coach. 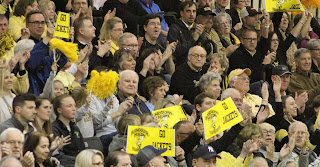 Posted by robwitham at 1:46 PM