For head coach Josh Merkel and the Class of 2019, down one player due to the injury to Jon Nowell in the Old Dominion Athletic Conference (ODAC) Championship last Sunday, it was time to host the Yellow Jackets' first NCAA Division III Championship Tournament game in four years. And, as veterans should do, Randolph-Macon got off to hot starts in both halves, surviving multiple runs from Morrisville State to eliminate the Mustangs 95-70 Friday night before a sold out crowd at Crenshaw Gymnasium in Ashland.

Unselfish play, solid shooting, and, as Merkel noted, senior leadership, led the way as five players scored in double figures, led by Corey Bays, who averaged 11.3 points per game at home, but went for 24 on this night.

"I have to give credit to my teammates. I think all my threes were assisted," Bays said after the win. "I'm just trying to play with a positive energy all game, even when one doesn't fall, keep your head up."

The Yellow Jackets took some extra time off early in the week to heal, and prepare for what they hoped would be a two-game weekend. That actually fueled Randolph-Macon's great starts in both halves, as they set the tempo early, and pretty much kept it for most of the contest.

"These guys were ready to play, and might speak to the starts. Our guys are mentally tough. They want to be out there," Merkel explained. "They'll fight through some pain. Corey looked like himself, and I think G (Midulla) will, too."

Merkel noted that, after looking at the tape of their 70-59 loss to Guilford in the ODAC Final Sunday, that the responsibility weighed on his team's performance, and was not due to injuries and certain players not being available.

As for the advantage of playing at home for this, the first NCAA appearance for the entire roster, Bays assigned it a perfect identity.

"It's a great hostile environment, great to play in, too," Bays said. "I loved every minute of it. Can't wait to do it tomorrow."

Waiting for the Yellow Jackets will be York (PA), who made 14 of 27 threes in their first round win over DeSales. Randolph-Macon was 11 of 27 from beyond the arc. But this matchup will be much more of a battle of sharpshooters. As Merkel notes, the Spartans bring a different skill set to the table.

"York is five-out. This style is going to be a little bit different," Merkel explained. "They're not Guilford where they're shooting some shots just so they can go get it on the glass. This is going to be a great matchup, one where we need all of our discipline, staying down, staying on the floor on those shot fakes. If we can limit them to one shot and make it a contested one, it could be a great night for us."

Tip-off is set for 7pm at Crenshaw. Ticket information, if any are available, is at RMCAthletics.com. 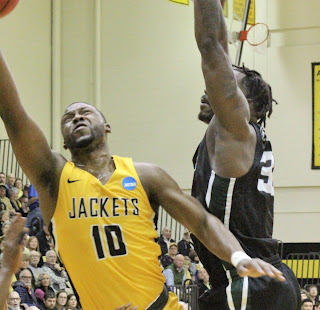 The Spartans (22-7) began the night on a 19-4 run, shooting 62.7 percent from the floor and 51.9 percent from beyond the arc to run away from their Pennsylvania rivals. Joey Polczynski (pictured) leads York with 22 points, while CAC Player Of The Year Jason Bady added 19. Ben Pratt led DeSales with 16 points. York took 27 three-pointers in the contest, making fourteen. 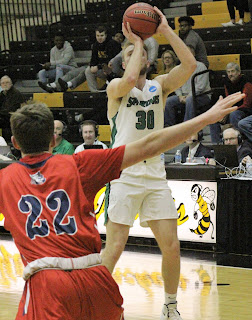 Posted by robwitham at 6:47 PM