Exactly seven years to the day that the University of Richmond Spiders came to a packed Crenshaw Gymnasium for an exhibition against the Randolph-Macon Yellow Jackets, they hosted their neighbors from the north at the Robins Center Sunday night.

Both teams entered with plenty of questions, and likely left with just as many, as the Spiders struggled at times to get into an offensive rhythm, while a better shooting night for the Yellow Jackets could have created a different result.

Still, Richmond's 70-57 victory gave the Spiders ideas on what they must improve on before tipping off their 2019-2020 season at home Friday night, and the game should also give Yellow Jacket fans a lot of optimism for a season that will include the necessity for new players to play major roles, as three specific returning players will offer both leadership and experience, both on and off the court.

But for a team that relies heavily on the ability to stretch defenses and provide consistent offense from outside, specifically beyond the arc, the Yellow Jackets will need to shoot better than the 34.5 percent from the field, and 24.1 percent from three-point range, that they registered Sunday night. It wasn't the different scenery, playing in a place like the Robins Center according to head coach Josh Merkel. It was the Spiders.

Facing the speed of a Division I program, even one looking to bounce back from an injury-plagued season of their own, will benefit the Yellow Jackets. Watching film of the game can help remind them of the tempo they wish to set, especially in attack mode offensively.

Anthony looked even better than last year, when he claimed Old Dominion Athletic Conference (ODAC) Player of The Year honors, even though his offensive production waned after halftime. There are others, from Mallory (pictured) and Talbert, to seniors Corey Bays and Korey Turner, who can fill the hoop.

Perhaps the bigger story was on the glass, where Randolph-Macon prevailed 37-36, with ten offensive boards to the Spiders' six. Grant Golden, who led Richmond with 17 points and seven rebounds, was not pleased with his team's performance.

"We didn't play very well tonight. Credit to those guys, they came out, played really hard, ran their stuff really well," Golden said. "We weren't good tonight. Too soft from us. We weren't ready to play, and that's something we can't have, especially to start out the season."

Nick Sherod, returning from a knee injury last December, went three for four from beyond the arc, finishing with eleven points, looking every bit the player he was pre-injury, hoping to provide Richmond with solid offense. Blake Francis, who averaged 17 points per game at Wagner before transferring to the Spiders, scored 15 points in 27 minutes.

Randolph-Macon now prepares to open the season for real this weekend with two games at the Dan Greene Memorial Tournament at St. Mary's College of Maryland, facing Washington College Saturday at 2pm, and the hosts on Sunday at 12pm. 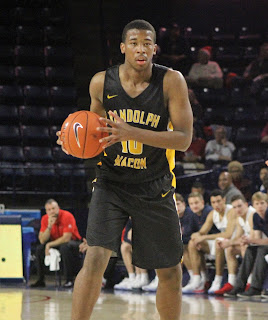