ASHLAND -- We should have known a special night was coming for Randolph-Macon junior Catherine Kagey when she hit nothing but net on a 55-foot shot just after the start of the buzzer ending the first period of Wednesday's Old Dominion Athletic Conference (ODAC) showdown with Shenandoah.

It was the only thing that didn't go Kagey's way on this night, as she dominated the court from end to end, pouring in 28 points, grabbing eleven rebounds, and creating openings for her teammates as Randolph-Macon pulled away from the Hornets for a 65-49 victory to improve to 10-2 in ODAC play, and 13-5 overall.
"The work that Catherine puts in on the court, she does that everywhere, whether in the classroom, anything she does is at full throttle," noted Yellow Jackets head coach Lindsey Burke after the win. "Even near the end, I kept asking her, do you need a sub? You're everywhere on offense and defense, and if you need a breather, I'll take you out, and she said, no, I'm good, I'm good."
Kagey was the constant presence on this night for the Yellow Jackets, but her performance was more a matter of opening space for her teammates rather than putting them on her back. Senior point guard Cheridan Hatfield was in double figures with 12 points, adding six rebounds, four assists and a block. Freshman Jane Elkins flashed signs of being a future Kagey for the Yellow Jackets, scoring eight points and grabbing five rebounds in just over fifteen minutes of action.
The first of two sparkling assists involving Hatfield and Kagey came in the first period, as Kagey scored an And One driving to the hoop after grabbing a Hatfield laser for a 9-4 lead.
The Yellow Jackets built a nine-point advantage, but the Hornets cut into it just before intermission, cutting the margin to five at 26-21.
Shenandoah (7-5 ODAC, 11-7) began the third period constantly feeding center Shawnise Campbell, who scored six of her 14 points on three consecutive possessions, helping to tie the game at 30-30.
But Randolph-Macon rolled off five quick points before the media timeout to take the lead for good at 35-30, extending it to 45-37 after three periods.

Juliana Park only scored three points, but they came at an important juncture, answering a Shenandoah basket to start the fourth period, stretching the margin to nine at 50-41 with seven minutes left. About two minutes later in transition, it was time for Kagey to feed Hatfield, blasting a one-hop pass forty feet down the court to a cutting Cheridan for two. Then, Kagey forced a turnover near the top of the key, was fouled at the basket and made two free throws for a 56-43 lead with 5:03 left, a sequence that sealed the Yellow Jacket win.
Now tied with Randolph for second place in the ODAC at 10-2, the Yellow Jackets look to Saturday's annual "Back To The Hive" event, the women's basketball program's equivalent to Homecoming. Burke knows they are entering the homestretch of their regular season schedule, with their next three games quite winnable (Averett, Eastern Mennonite and Roanoke) if you look at the current standings.
But when the ball is tipped, standings don't matter. Execution does. And one thing Burke doesn't worry about with her team is effort.
"We started slow, and I thought we were peaking after Christmas, and I thought the Washington & Lee game (a 75-50 loss) was a bit of a step back," Burke noted. "But I really think that (loss) has propelled us forward, which I'm glad. Our bounce back has been tested at times, and we're getting much better at it."
Now, instead of having to bounce back, these Yellow Jackets have a chance to continue forward, with seven games left, six of them in conference play, including a home rematch with Randolph, the only other ODAC team to defeat them, on February 11th.
NOTE: There will be an alumni game at Crenshaw Gymnasium at 11:30 Saturday morning. The Randolph-Macon/Averett game will tip at 2pm. At halftime, along with the annual recognition of alumni in attendance, there will be a court dedication ceremony honoring legendary head coach Carroll LaHaye, who retired after the 2019-2020 season. A reception will follow the game in Alumni Gym. 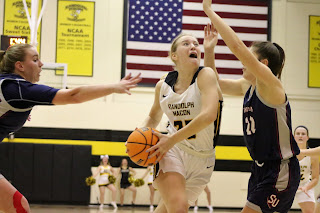 (Jane Elkins drives to the lane during the R-MC victory. She scored seven points in fifteen minutes.) 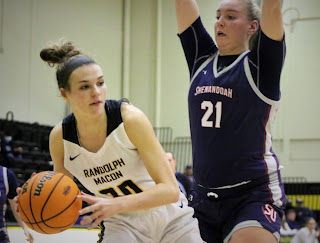 (Catherine Kagey drives in the third period of the victory. She scored 12 of her 28 points in that frame.)

Great write up! Thanks 🙏🏻