There were enough side stories for Wednesday night's men's basketball showdown between Randolph-Macon and Christopher Newport to fill Crenshaw Gymnasium, as fans did on this evening.

--Randolph-Macon, #2 in the nation, sought its 57th consecutive home victory
--Christopher Newport, #5 in the nation, not only sought to end the Crenshaw run, but hand the Yellow Jackets a loss for the second straight season.
--Thus, Randolph-Macon sought revenge for a 77-76 overtime loss in Newport News on November 28, 2021.

But, as it turned out, once the ball was tipped, none of that matter. And, despite a slow offensive start by both teams, combining for just three made buckets in their first 21 attempts, what unfolded was simply, truly, a magnificent battle on both sides of the court.

Down three at the half, and by as many as seven, the Yellow Jackets began to finally seize momentum in the game's final seven minutes, highlighted by a Miles Mallory block for the ages as the Yellow Jackets downed the Captains 64-59.

"I'm trying to think, because I've seen that guy make some big-time plays," noted Randolph-Macon head coach Josh Merkel after the win. "His ability, too, to not just block but keep it in play, get it back himself is super special."

The block occurred when, with just under a minute left when Christopher Newport's Ty Henderson battled to the glass, only to see his bank shot never actually bank. The long arm of Mallory pinned the basketball against the backboard, and, using strength and dexterity, the senior grabbed possession, and didn't let go. It was a four-point game at the time, 58-54.

Then Mallory called for an offensive play which should give him an open look from three at the top of the key. He calmly sinked it to send the White Out crowd at Crenshaw into a frenzy and the Yellow Jackets to their fourteenth win of the season.

While Mallory shined down the stretch, it was a team effort to keep up with Christopher Newport, who led 25-22 at the break and quickly jumped out to a 35-28 lead early in the second half. The Yellow Jackets (6-0 ODAC, 14-1) slowly began to reel the Captains in. This is when junior forward Daniel Mbangue went to work.

Beginning with a block with 15:22 to play, Mbangue scored eight critical points over the next eleven and a half minutes to help the Yellow Jackets finally retake the lead, then begin to build it, ever so slightly.

The other key to the victory? The free throw line. Randolph-Macon couldn't have been pleased with walking off the court at the end of the first half seeing the scoreboard say "1" for the number of fouls called on Christopher Newport. While it's one thing to tell your team at the half to create free throw opportunities, it's another to actually go out and do it.

"We talked about we were taking shots that they wanted us to take," Merkel said of the halftime conversation in the locker room. "We just talked about playing with more force, getting downhill, attacking some of the shot blockers' chests, playing two-man games. Those guys know that they can do it, they played with force before. I like how we played in the second half."

Mallory led the Yellow Jackets with 19 points, 11 rebounds and five blocks, while Mbangue had 15 points and eight boards, and Josh Talbert added 12 points and five assists.

"He's filling the box score," Merkel said of Mbangue's improvement this season. "His leadership, his belief in himself. The first shot he made is one he's been working on."

Freshman Keishawn Pulley, Jr. (St. Christopher's) played 28 minutes off the bench, and while struggling from the floor, hit all four of his second half free throws and grabbed six big rebounds for Randolph-Macon. Jahn Hines led Christopher Newport with 26 points, while Trey Barber added 15.

The victory ended an eight-day odyssey to begin 2023 that saw the defending Division III National Champions take their best shot from archrival Hampden-Sydney on the road, then ODAC rival Guilford and the Captains in back to back huge home tests. The Yellow Jackets will look to avoid a letdown when they travel to Lynchburg for a 2pm tip on Saturday against the Hornets. 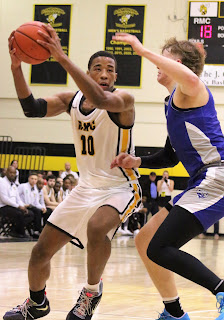 (Miles Mallory, #10 left, drives to the rim in the first half of Randolph-Macon's 64-59 win over Christopher Newport Wednesday night at Crenshaw Gymnasium to improve to 14-1 on the season. Photo: RVA Sports Network)
Posted by robwitham at 11:13 PM