The senior from Powhatan continued her hot start to the 2015-16 season Tuesday night, leading Randolph-Macon to a 78-57 win over Roanoke in the team's home Old Dominion Athletic Conference (ODAC) opener to improve to 2-0 in conference play, 5-2 overall.

Katie Anderson (Patrick Henry) earned another double-double with 17 points and 12 rebounds. The Yellow Jackets surged to an early 10-0 lead, and led 21-6 at one point in the first half before Roanoke cut the deficit to three at 35-32. But in the final two minutes of the second period, Randolph-Macon enjoyed a 7-0 run to enter the break ahead 42-32, and the Maroons never seriously threatened in the second half.

Head Coach Carroll LaHaye was pleased with the effort, but looks ahead to a choppy schedule and is concerned about one area of her team.

"Conditioning is important," LaHaye noted. "We got out to that early lead and then for a time we looked a little tired. With exams next, we'll need to keep working on conditioning."

Livermon agreed with LaHaye, noting she had worked on it over her Thanksgiving break, and knows it makes a difference as to whether she is able to continue shooting consistenly deep into the second half.

The Yellow Jackets don't play again until they reach San Juan, Puerto Rico for a holiday tournament December 17th where they will face in-state foe Mary Washington at 11am, the first of two games on the trip. (Photo Courtesy of Nick Liberante) 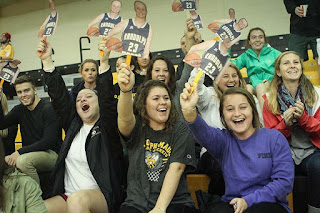