For many years, when I thought of September 11, 2009, I thought about the fact that, on that day, I suffered my second layoff from a job in less than two years. But later that evening, it was time to begin my then eighth season as the voice of Patrick Henry High School football on WHAN Radio with a game at Hanover.

In those days, learning about an opposing team consisted of plowing through the roster when you got to the press box, in other words, learning on the fly. And, while preparing for the broadcast, I realized that, on that night, the Hanover Hawks, having lost their previous quarterback Josh Wells to graduation, were starting a mere freshman under center.

His name was Sam Rogers. And I would soon learn there was nothing "mere" about him.

Here's a quote from my commentary on that Hanover/Patrick Henry game from a 2009 podcast.

"From a statistical standpoint, Sam Rogers did not do very well, but he did what I would call a solid job of managing the game and not making the mistakes mentally that the Patrick Henry offense did make, and that was a lot of the reason in terms of Hanover took over the game in the second half."

Rogers, taking over from the graduated Josh Wells at quarterback, had leaders to learn from in Blake Jones and Deane Cheatham, and, by the end of the regular season, the Hawks had won five straight to finish 7-3 and make the Division 5 playoffs, where they defeated Dinwiddie and Petersburg to reach the 5A State Semifinals. In a titanic battle, Rogers and Hanover fell to powerhouse Phoebus 10-7, but the statement made by that team in their final eight games was loud and clear. We were in a new era for Hanover football, which, at the time, was still only seven seasons young.

2010 was our final season covering Patrick Henry exclusively on WHAN, and, having not made the playoffs, we decided to broadcast Hanover's playoff games, a win over Petersburg, then a very tough 28-21 loss to Dinwiddie at home in the Division 5 Championship. The 2010 team with a sophomore Rogers at the helm was state championship capable, but were tripped up by a team that had become the unlikeliest of rivals, and continue that rivalry to this day.

2011 saw WHAN add its FM translator at 102.9 FM and we expanded season-long coverage to our "Game of The Week" format covering all four Hanover County schools. We saw Sam early, saw the team have to make a big adjustment when Sam hurt his elbow in mid-season, It was thought he was out for the year, but, in typical Rogers fashion, he returned for the last two games of the regular season wearing a special brace to protect the elbow, and moved to an H-Back position, helping Hanover defeat Dinwiddie and Atlee, the latter game avenging a 24-14 loss to the Raiders at midseason, to clinch yet another 5A State Semifinal appearance.

We traveled north to South County High School for the Saturday affair and watched the Hawks fall a step short of the state championship round again, a Hawks team playing a team from a much bigger school. That disparity was one of the reasons for the 2013 complete realignment by the Virginia High School League.

Rogers was squarely at the helm in 2012, but had to overcome more injury issues before returning under center for the final stretch that included winning at Lee-Davis, and at Hopewell, for the third Division 5 Region title in Rogers' four seasons. This time, Stone Bridge had to come to Hanover, and the Hawks fell behind early, played catch up for most of the game, and simply ran out of time.

Late in the fourth quarter, facing 4th down and 24 at the Stone Bridge 27, Rogers threw his final high school football pass. It was a 27-yard touchdown strike into double coverage to future Norfolk State defensive standout Donte Haynesworth. Think about that.

The Bulldogs got the ball back and ran out the clock. Had Rogers and company had one more chance, we would have had overtime.

There was no quit in Sam Rogers. Then, and now.

On a personal note, I've only gone down to the field after a broadcast one time to specifically seek out a player to speak to them. It was that evening, to find Sam Rogers. Fittingly, at the Hawk statue near the stadium field entrance, I found him, and congratulated him on an incredible career. I saw the disappointment, but I also knew the promise.

Bucknell wanted him for college football, but Rogers believed he could play at the highest level in college. Both Virginia and Virginia Tech offered walk-on spots, and Rogers chose the Hokies. The rest, as they say, is history, going from a walk-on at the bottom of the depth chart to opening day starting fullback his freshman year against, all of teams, Alabama.

We traveled to Lane Stadium a few weeks later on an extremely rainy day to cover Rogers in his freshman season when Virginia Tech beat Marshall in overtime. He was already making an impact, especially at the time on special teams.

His Hokie career is well-documented, and, for me, not surprising. Rogers works as hard than any player in any sport I've ever covered. Thus, when the Los Angeles Rams selected him last Saturday in the sixth round of the NFL Draft, an organization in need of upgrades everywhere will definitely get one on special teams, and Todd Gurley will be getting a great blocking escort out of the backfield.

I can't wait to see what the future holds for him, and, I'm glad I bought his rookie card, only the second player I've covered in 15 years of high school football broadcasting whose NFL card I've obtained. The other was Macho Harris of Highland Springs, who briefly played for the Philadelphia Eagles last decade.

I cannot congratulate Sam enough on his accomplishments thus far. The greatest part? He did it the right way. Never will you see Sam focus on him, it's always the team. Thus, his teams were always the better for it.

It seems like yesterday, but it was June, 2013 when Rogers walked the stage at Siegel Center to receive his Hawk diploma. Now, armed with his Hokie degree, he's ready for the NFL. 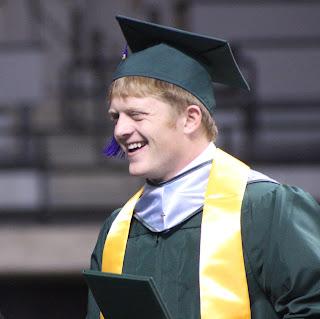