The regular season has completed, unofficial numbers are shaking out, and here is where we believe our county teams are headed for first round playoff action.

LEE-DAVIS (8-2): By virtue of their 29-18 win over Patrick Henry in The 57th Tomato Bowl, and Hanover's win over Henrico, Lee-Davis moved up to the #5 seed in 5A South Central, finishing just a tenth of a point behind Douglas Freeman. The Confederates are projected to travel to the Rebels next Friday in round one, the winner to face the winner of Meadowbrook/Highland Springs on November 20th. 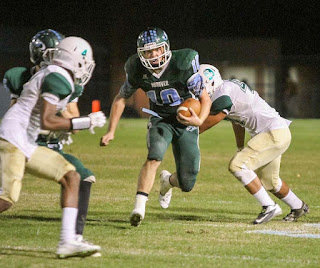 HANOVER (7-3): A huge win over Henrico, 24-21, in Clayton Cheatham's return (pictured above), propels the Hawks to the #2 seed in 4A East (Conferences 19/20), giving them a home game next Friday against #7 Louisa according to our projections. The winner there gets the winner of Dinwiddie/Monacan, the projected #6 vs #3 game. The good news for Hanover is, with a win, they get to host that second round game November 20th.

ATLEE (6-4): Despite a 70-0 win at Armstrong to close the regular season on a three-game winning streak, the Raiders remain 10th in the projected standings in 5A North. Mountain View fell from a tie for fifth into seventh with a loss Friday, meaning the Raiders are projected to head to Stafford County next Friday to face the Wildcats. Mountain View beat Lee-Davis in the 2014 season opener 21-16. A win could mean Atlee gets defending 5A North Region champion Tuscarora, the #2 seed, in round two November 20th.

Due to their loss in the Tomato Bowl, Patrick Henry (4-6) saw its season come to an end on Friday, unable to jump past Potomac and Halifax County into the 5A North Region playoffs. The Patriots, however, will have the vast majority of their starters returning next season, and a year's experience of life in the Capital District with them, and will be poised to return to postseason action.
Posted by robwitham at 1:06 PM