Randolph-Macon football's defense delivered their best performance of the season, holding off Hampden-Sydney time after time and scoring the eventual game-winning touchdown on a pick six from freshman J.J. Hill in the first quarter, as the Yellow Jackets ended a disappointing 2015 season with a third straight victory, 14-9 over the Tigers in the 121st edition of The Game.

The Yellow Jackets end 2015 with a 4-6 record, their first losing season since 2006, and while they lose 26 seniors, including tailback John Byrd, who finished with 2,317 career rushing yards, they will return a core on both sides of the ball, including a host of now rising sophomores on offense baptized by fire this season.

Meanwhile, in New Jersey, Yellow Jacket volleyball avenges a five-set loss to fifth-ranked Christopher Newport September 26th with a five-set win Saturday in the NCAA Division III Tournament Second Round. ODAC Player of The Year Courtney Lowers had 25 kills and 25 digs as the Yellow Jackets won the tiebreaker 15-13 to advance to third round play Sunday at 2pm against host Stockton University. Randolph-Macon is now in the final sixteen of the national tournament.

In women's basketball, Katie Anderson (pictured below, courtesy Nick Liberante) was named Most Outstanding Player of the R-MC Tip-Off Classic, scoring 17 points and grabbing 17 rebounds as Randolph-Macon held off Mount St. Vincent 72-67 Saturday evening at Crenshaw Gymnasium to move to 2-0. Lauren Vugteveen also had a double-double with 11 points and a matching 17 rebounds, while Hannah Livermon, named to the All-Classic Team with Anderson, led all scorers with 26 points. 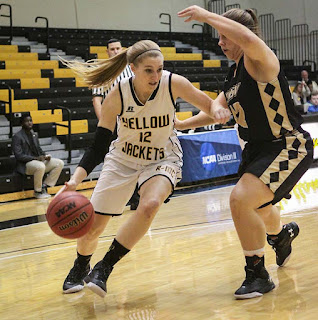