Sophomore tailback Tre Frederick, who rushed for 1,387 yards and eleven touchdowns, both ODAC-best figures, was named the ODAC Offensive Player of The Year, while defensive end Cole Burdette, who had 9.5 of the Yellow Jackets' league-leading 34 sacks, and helped spearhead an offense that gave up just 11.5 points per game in the regular season, was named ODAC Defensive Player of The Year.

Six Yellow Jackets earned Second Team honors, while an additional three were named to the Third Team. CLICK HERE to see the 2016 All-ODAC team in its entirety. 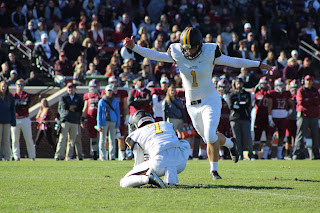 Posted by robwitham at 5:41 PM