Despite a 13-point afternoon from Old Dominion Athletic Conference (ODAC) Championship All-Tournament Team member Buzz Anthony, the newly crowned ODAC Player Of The Year and his Randolph-Macon teammates could not generate enough offense, shooting just 11-of-35 from beyond the three-point line in a 70-59 loss to #2 Guilford in the 2019 ODAC Men's Basketball Championship Game on Sunday at the Salem Civic Center.

The loss, the first by double digits this season, places Randolph-Macon at 25-3 overall. The Yellow Jackets entered this week as the number one seed in the NCAA South Region, while the Quakers, now 21-7, entered the week ranked fifth.

Anthony was joined on the All-Tournament Team by Luke Neeley.

The Yellow Jackets will learn their NCAA Division III Men's Basketball Championship fate when the tournament field is announced on Monday at 12:30pm. It is likely that the Yellow Jackets will earn an at-large bid, but did the loss Sunday in the ODAC final cost them an opportunity to host a first and second round pod at Crenshaw Gymnasium this coming Friday and Saturday?

We will have to wait to Monday afternoon to find out where the Yellow Jackets will play their first NCAA Championship game since 2015. (File Photo) 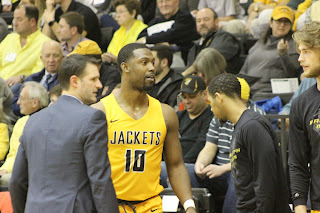 Posted by robwitham at 4:49 PM