For Randolph-Macon's women's basketball, they have known that round three with Virginia Wesleyan has been on the horizon since shortly after their Senior Day loss to Guilford back on Saturday.

The Yellow Jackets, the #4 seed in the ODAC Championship that officially begins Tuesday night with two first round games, will square off against the Marlins at 3pm Friday in Salem, Virginia. Virginia Wesleyan took the first encounter 79-77 in overtime in January, while, one week ago, the Yellow Jackets exacted revenge with a comeback 68-62 win.

The winner would get top seed Guilford in the semifinals, should the Quakers get by their quarterfinal opponent, which will be determined tonight as Bridgewater makes the short trip to Shenandoah for the #8/#9 first round matchup.

Charlotte Woods and Michal Ross, Randolph-Macon's two leading scorers, did not play in Saturday's Guilford loss. Woods is expected to be ready for Friday's quarterfinal, and the team is hopeful Ross will be as well, but aren't as sure at this point. 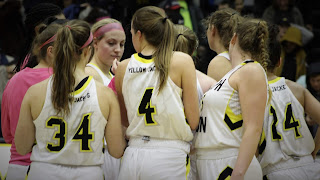 Meanwhile, the Yellow Jacket men roll into ODAC Championship play, finishing 15-1 in the conference, 23-2 overall, owning a pair of ten-game winning streaks for the first time in 15 years.

Head Coach Josh Merkel and his staff now guard against the quarterfinal letdown which has beset Randolph-Macon each of the past two seasons. By virtue of their 88-80 win on Monday night, Randolph College, the #9 seed, will be the Yellow Jackets' first opponent in Salem at 1pm on Thursday.

With the Yellow Jackets #1 in the NCAA South Region rankings, wins Thursday and in Saturday's semifinal, we believe, should be enough to land Randolph-Macon an NCAA Tournament bid regardless of Sunday's results. An ODAC Championship, however, would seem to guarantee the Yellow Jackets would stay home and host a first/second round pod on March 1st and 2nd.

The last time the NCAA Division III Men's Tournament came to Ashland was the Rounds of 16 and 8 in 2015, when Randolph-Macon won 25 games in a row, the ODAC title, and fell by two points in a heartbreaker to rival Virginia Wesleyan, sending the Marlins to the Division III Final Four. 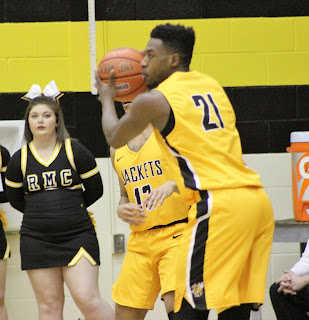 1) The women's tournament field is wide open. There is no dominate team, and any of the top six seeds have the talent to get on a three-day run, shoot the ball well, and cut the nets in Salem. The Yellow Jackets can repeat, but they must find outside shooting and absolutely have to be sterling at the free throw line.

2) The men control their own destiny. The key is to play their game and constantly look forward. The bigs, from Jon Nowell (pictured above) to David Funderburg, and especially senior Darryl Williams, need to be ready to produce in the paint should there come a game where the recent torrid three-point shooting of the Yellow Jackets disappears. They'll have to win different ways in order to take three in Salem and bring home the title trophy.

NOTE: @hanoversports on Twitter will provide real-time updates of the Yellow Jackets in action in Salem beginning Thursday with the men's quarterfinal.
Posted by robwitham at 12:00 PM