The perfect set-up Wednesday night at Crenshaw Gymnasium: Senior Night for Andre Simon and Jamie Robinson, a sold-out crowd pumped to face arch-rival Hampden-Sydney, and a chance to clinch the ODAC Tournament title.

Chris Hamilton decided to lead the party in Ashland, and single-handedly sent the Tigers back to Farmville disappointed.  Hamilton was 8-for-8 from three-point land, and hit three free throws when fouled behind the arc with 4.1 seconds left in the half as Randolph-Macon rolled 90-67 to clinch the regular season crown and the number one seed in next week's ODAC Tournament in Salem.

"I know my job here is to be a shooter," Hamilton noted. "It's great to have the confidence of my teammates and coaches to know whether I make five in a row or miss five in a row, they want me to shoot the ball."

His final trey, after the ball was almost knocked away from him, came when he pulled up from 30 feet in front of HCS Media's courtside position. When it went in the basket, the sold-out crowd, already providing the best atmosphere for a game in Crenshaw in years, exploded into celebration.

On Senior Night, Andre Simon wasn't called to carry the load inside, scoring seven points and happily finding ways to pass the ball to the hot outside shooters. The Jackets shot 56.7% from the field.

Lost in it all for the Tigers was a 49% shooting performance and great inside play from Khobi Williamson, who had 17 points, 8 on dunks, and 11 rebounds. But there was simply too much for the Tigers to overcome defensively. 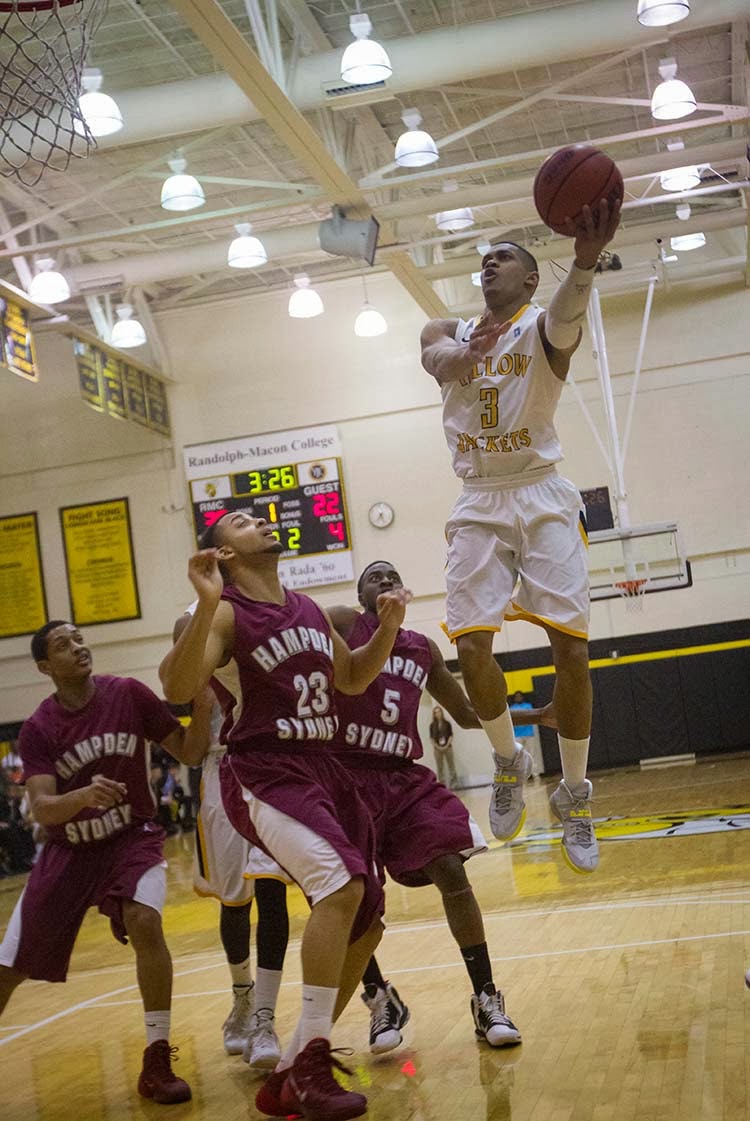 Twelve Jackets scored in the game, a sign of their immense depth and ability to continually throw fresh, and talented bodies, at the opposition. If this team can avoid the "ice cold" shooting game, they could go further than the 2012-13 squad, who won the ODAC Tournament from the #3 seed, then made it to the Sweet Sixteen of the NCAA Division III Tournament despite having to travel six plus hours to play three weekends in a row.

Randolph-Macon looks to avoid a letdown in their regular season finale Saturday, 7pm, at Washington & Lee.

NOTES: The win was 112 overall for head coach Nathan Davis...witnessing the win at courtside was Hall of Fame head coach Paul Webb, the father of Randolph-Macon basketball with 315 wins from 1956 to 1975...in this, his fifth season at the helm, Davis has yet to miss an NCAA Tournament appearance.
Posted by robwitham at 9:11 PM