At the same time, at two locations, all four county field hockey teams were in action against each other in the first what will be many simultaneous "rivalry nights" now that Patrick Henry has joined Atlee, Hanover, and Lee-Davis in the Capital District.

In Mechanicsville, which just barely missed a torrential rainstorm which could have forced a postponement, Lee-Davis allowed an Atlee goal just two minutes into the match, then shut down the Raiders the rest of the way, taking a 3-1 victory to improve to 1-1. The Raiders, who lost to 5A power Gloucester last Tuesday in their season opener 9-0, falls to 0-2.

Lee-Davis was led by senior captain Lauren Wolfgang, who scored both the tying and go-ahead goals in a seven-minute stretch to give the Confederates the lead for good at 2-1 with 17:48 left in the first half. Ciarra Ashworth added an insurance goal in the second half.

Meanwhile, in Ashland, it was the Kane connection as Kora Kane scored twice, Keri Kane once as the Hawks improved to 2-0 with a 3-1 win at Patrick Henry. 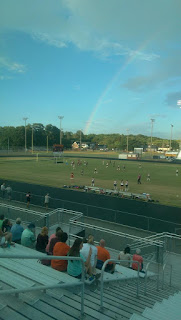 (A rainbow from a nearby storm appears over the stadium tonight at Lee-Davis...)
Posted by robwitham at 12:09 AM