Few times at the high school level do basketball teams overcome a 32-10 deficit. But the Midlothian Trojans did just that and turned a potential blowout into a classic opener tonight at Hanover.

The Trojans came all the way back to tie the game at 69 late in the fourth quarter. But when it mattered most, Hanover shined at the free throw line and held on for dear life to win their season opener in the Conference 20 Tip-Off Tournament 77-73.

Cutch Ellis, who briefly took the game over with 10 points in the first 2 1/2 minutes of the second quarter, led the way with 28 points. The Hawks had leads in the period of 26-8 and 32-10. But Hanover's achilles heel was fouls, committing 14 in the first half. 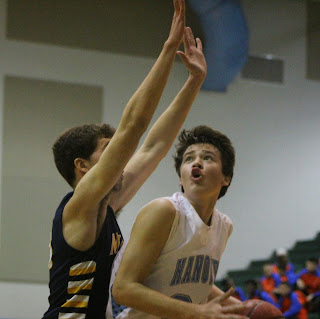 Midlothian star guard Korey Turner would take advantage, hitting eight free throws and scoring 14 overall in the second quarter himself. His personal 10-point run helped the Trojans cut the lead to 12 by halftime, 39-27.

Turner's dominance was key as Midlothian hung around and hung around in the third quarter, frustratingly unable to cut into the lead, but staying without shouting distance. They turned up their defensive full-court pressure as the fourth quarter began, happily trading foul shot opportunities for the Hawks for several turnovers, fueling the Midlothian effort. (Midlothian's Korey Turner fights Jordan Wade for the ball in first half action...)

Midlothian's final push was still to come, as another Hanover turnover gave the Trojans a shot at the lead with a trey. Sammy Hooper was fouled, though, and he responded with two free throws to tie the game 69-69 with 89 seconds left. It was now that the Hawks would be clutch from the charity stripe.

Ellis was fouled and he hit two. Hooper traveled with 31 seconds left, forcing the Trojans to immediately foul Jalen Elliott playing the point. He nailed two from the line, the lead was back to four. Turner, who was money all night at the line, missed two free throws with 14 seconds left after a freshman mistake by Jason Wade, fouling him from behind bringing it up court led him there.

The Hawks went 3-of-4 in their final free throws, and Turner nailed a trey, finishing the night with 32 points, as the final seconds ticked away.

"We practice free throws every day," Ellis said after the game. "At the beginning and the end of practice we work on free throws, and it came in clutch."

Hanover, at 1-0, advances to Friday's winner's bracket to play J.R. Tucker, 52-39 winners over Powhatan in tonight's opening game at Hanover. Tip-off will be at 6pm at Glen Allen High School. Midlothian (0-1) will face Powhatan in the consolation bracket at 6pm Thursday at Glen Allen.

Congratulations to the Atlee Raiders, who won their opening round game in the 2013 Rebel Invitational at Douglas Freeman, 60-54 over Collegiate. The Raiders advance to semifinal action Friday night, 6:45 at Douglas Freeman.

In girls action, Hanover fell to Midlothian 87-37 in their season opener in a quarterfinal game played at J.R. Tucker. Hanover will play Powhatan in the consolation round tomorrow night.
Posted by robwitham at 11:43 PM