In a battle of unbeatens Friday night at Trinity Episcopal School, Patrick Henry rode the first half scoring of Amber Lee and the second half scoring of Summer Price to lead from tip to buzzer in a 59-46 win over Meadowbrook in the opening round of the 19th Times-Dispatch Invitational Tournament.

Lee knocked in 14 of her 19 points before intermission, helping the Patriots to a 29-22 lead. Then Price took over, scoring 22 of her game-high 32 points in the second half. For the game, she shot 12-of-13 from the charity stripe, taking advantage of the dribble drive to draw Monarch fouls for trips to the free throw line. 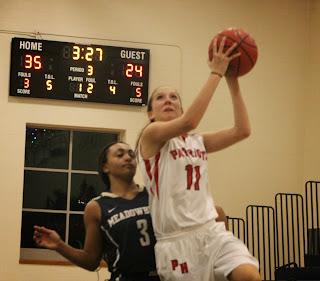 (Summer Price with two of her 32 points in Patrick Henry's win...)

Patrick Henry improves to 7-0 while Meadowbrook falls to 6-1. The Patriots next face Cosby, the top ranked team in the region, Saturday at 5pm in the T-DIT Semifinals.  The Titans knocked off Glen Allen in first round action 58-47.

Cosby has been a thorn in the Patriots' side in recent years, knocking Patrick Henry out of the old Central Region postseason tournament in each of the past two seasons.  The game will be played at Crenshaw Gymnasium at Randolph-Macon College right in Ashland!