The extra look, the extra pass. The Jackets were unselfish, efficient, and dominating Saturday in a 100-61 rout of Hollins University to move to 3-0 in the ODAC, 8-1 overall.

All of this accomplished without leading scorer Taylor Huber (21.4 ppg), out with plantar fasciitis in her foot. She'll be in a boot for a week, then re-evaluated, the foot hurt during the Jackets' 81-68 loss Thursday at Virginia Union. 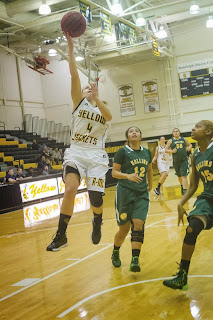 Sarah Parsons again led the Jackets in scoring with 24 points, but the next leading scorer was a pleasant surprise: freshman, and Atlee graduate, Stephanie Staples.

"Coach gave me a green light to score this morning," Staples said with a smile after the game.

"She didn't practice yesterday," R-MC head coach Carroll LaHaye noted, telling HCS Staples had a 101 degree fever Friday. "She got rest, but I didn't get to talk with her much Friday, so I told her today about the Richmond Times-Dispatch write-up the other day that called her a 'prolific scorer' and I said to her that's one of the reasons you're at Randolph-Macon."

Staples didn't hesitate, compiling her 16 points in just 17 minutes on the floor, going 6-of-9 from the floor, part of a stellar shooting day all around for the Jackets. They shot 53.8% from the floor, 52.9% from three-point range, and 21-of-24 at the charity stripe.

The Jackets, currently ranked 20th in the USA Today Division III Top 25 Poll, had five in double figures. In addition to Parsons and Staples, Katie Anderson, Lauren Vugteveen and Lindsey Sharman each scored ten, Sharman with impressive presence in the paint, going 4-for-4 in her 13 minutes of action.

Everyone on the roster not injured saw at least 12 minutes of playing time, maybe the most important statistic of the day going forward.  Freshmen like Marisha Berry, Andi Prugh and Taylor Intermill, the latter coming off injury which forced her to miss the first several games, got a good chance to get their feet wet in ODAC play.

The Jackets will break for exams, then head to Fort Lauderdale, Florida for the 2013 Cruzin Classic, where they will face Mount. St Vincent December 18th, then the College of New Jersey on December 19th. TCNJ has already defeated fellow ODAC member Lynchburg College in the Marymount Tournament to open the season November 15th and are 5-2 overall.

Last year they went to the Sunshine State and went 0-2. They look to reverse that this year, keep their Top 25 ranking, and bond even closer as ODAC showdowns loom after January 1st. 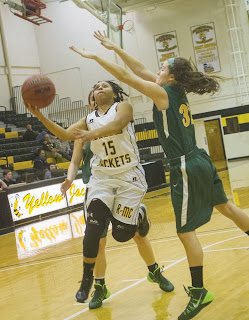