The 2015 season came to a wet and disappointing end Sunday afternoon in Newport News as region host Christopher Newport completed their second victory over the Yellow Jackets during the weekend, 11-6, to earn a berth in the NCAA Division III Tournament Super Regional next week in Salisbury, Maryland.

For Randolph-Macon, it ended a topsy-turvy, crazy three-day odyssey on the diamond, where they finished 2-2 in the regional, and ended this historic season with a record of 28-12.

After a wild, come from behind 8-6 first round win in nine innings over Ramapo College, the New Jersey Athletic Conference champions, on Friday, the Yellow Jackets returned to Captains Field Saturday to face the hosts. Randolph-Macon fought hard, but fell to Christopher Newport 3-2 to drop to the elimination bracket against Salem College.

The Yellow Jackets and Salem were tied when darkness suspended their game. Restarted Sunday morning, freshman Skylar Toth's two-run homer in the 12th started a four-run rally that proved to be enough to eliminate Salem 8-6, earning a berth in the championship round against the Captains.

But rested Christopher Newport spotted Randolph-Macon four first-inning runs, scoring ten runs in the third, fourth, and fifth innings, to pull away. Two rain delays due to subtropical storm Ana lengthened the day for the Randolph-Macon faithful, with the Captains wrapping up an 11-6 win just after 5pm, over seven hours after the Salem game was resumed.

Randolph-Macon ends their season with a promising future, though they must replace the double-play combination of power hitting shortstop Sharese Jarvis and leadoff hitting second baseman Amanda Sopko. Relief pitcher Carly Alford provided a boatload of leadership on and off the field this season.

The Yellow Jackets will return Bagley in the circle, hope for a return to freshman form from Kelsey McLaughin, and offensively enjoy another season from juniors catcher Madison Gilman, first baseman Katie Woody, and center fielder Sierra Ford. Add the late season surges at the plate from Harley Jones as well as Toth, and Randolph-Macon will, once again, be championship competitive in a very difficult Old Dominion Athletic Conference come 2016. (Picture courtesy of Randolph-Macon Athletics) 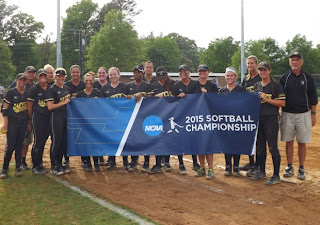 Posted by robwitham at 7:09 PM