Against a familiar foe, the Ashland Intermediate (50/70) All-Stars found both an arm to quell a comeback and the bats to clinch a championship.

After losing a 7-1 lead in the fourth inning as Central Chesterfield scored nine runs, Ashland inserted Carlos Cervantes onto the mound. Cervantes struck out six, hit a leadoff triple in the fifth for a three-run rally to tie the game, then launched an RBI single in the sixth to score Jeremyah Simmons as Ashland ran away with a 21-11 victory to win the District V Little League Intermediate (50/70) Championship Friday night at Mechanicsville Little League complex.

It was the second straight season that Ashland had to overcome Central Chesterfield for the title. It will be an experienced Ashland All-Stars that report to the State Intermediate Tournament next week in Alexandria, hosted by the Fort Hunt Little League. Ashland was eliminated a game short of the championship bracket round in 2014. 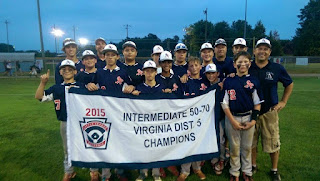