When the Virginia High School League underwent its first total reclassification in 43 years in 2013, fans in Hanover County noticed that, with Patrick Henry in one region (North) in the new "5A" classification, and the other three schools in the other (South), the only way the Patriots would be a rival in postseason play would be, at the earliest, in the State Semifinals.

Little did we know that in just the second year of the new system, the county would get a dream matchup, as Atlee softball worked its way through the 5A South Region, taking runner-up, while Patrick Henry won its second straight 5A North Region crown, meaning the Patriots and Raiders would battle for a trip to the 5A State Championship.

So fans by the droves made the treacherous trek from Hanover to Fairfax on Friday June 12th to see Patrick Henry and Atlee do battle. For the Patriots, it was their third trip to the state semifinals in four years, going 1-1 in the previous two encounters.

A torrential rain storm flooded the field at Robinson Secondary School just before game time, sending teams and fans into the school. Once it ended, the field crew proceeded to perform a miracle on the playing surface, and at 8pm, it was game on.

In a back and forth battle, the Raiders prevailed 5-3 to advance to the 5A State Championship the following evening, where Atlee got revenge for a 1-0 loss to Hickory in the South Region final a week earlier, riding the pitching of Peyton St. George and a three-run single from Laura Kate Moss to a 3-0 win and the second State Championship in Raider history.

The win sent head coach John Earley and assistant coach Becky Levy into their planned retirements, announced at the start of the season. It was their second state title, the first coming in 2002 in the old Group AAA format with Levy the head coach and Earley the assistant.

Softball was, by far, the most successful sport in Hanover County in 2014-15, so it was fitting that two teams played at the state tournament level, and a county team brought home the trophy in our #5 Biggest Event of the season on RVA Sports Network! 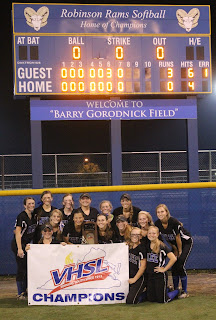 Posted by robwitham at 8:48 PM