An expanded postseason for boys volleyball in 2014 meant more teams in the playoffs, and three state championships to vie for instead of just one, great news for teams like the Midlothian Trojans and Hanover Hawks, who now could play in their own classification rather than have to battle through teams from much larger high schools, which was what VHSL reclassification was all about.

But few could predict in August that the Trojans and Hawks would dominate the 4A Boys Volleyball scene, and end up meeting a remarkable three times in the playoffs, with a trophy at stake each time.

And fewer could see coming the fact that every match would be a nail biter, down to the fifth set tiebreaker.

Hanover claimed victory at the Conference 20 championship. Then, a second meeting for the 4A "Western Section" title (akin to a Region title), which saw the Trojans come to Hanover, fall behind, then storm back for the five-set win.

Each dispensed of their state semifinal opponent, setting up one final showdown on the afternoon of Friday November 21st at the Siegel Center on the VCU campus. Players fighting injury gutted it out one final time to try to take the ultimate prize back to campus.

And it couldn't have been contested much closer, with the Trojans taking set one 25-21, the Hawks set two at 25-23, then Midlothian in set three 25-23, the Hawks taking the fourth encounter 25-19. Of course, there had to be a fifth set.

It, too, was down to the wire, with Midlothian surviving at 15-13 to take the 4A State Championship. In the end, Midlothian won three of four matches against Hanover, including one in the regular season.

Thank you Trojans and Hawks for our #4 Biggest Event of 2014-15 on The RVA Sports Network! 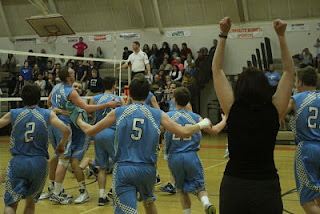