When the Randolph-Macon Yellow Jackets men's basketball team fell to Frostburg State on November 30th to go to 3-2 on the young season, no one leaving Crenshaw Gymnasium that afternoon could foresee how the next 25 games would go.

The Yellow Jackets would win every game in December, then January, then February, completing their first-ever unbeaten Old Dominion Athletic Conference (ODAC) regular season. The streak began with a victory over Virginia Wesleyan in Norfolk, and continued in mid-January when the Yellow Jackets got a late three-pointer from senior point guard Marcus Badger to nip the Marlins in Ashland before a sellout crowd and regional television audience.

To begin March? The ODAC Tournament Championship on an icy Sunday in Salem as the Yellow Jackets against faced the Marlins, playing behind most of regulation. Randolph-Macon forced overtime, then was able to put away Virginia Wesleyan for the tournament title 81-74 with Badger named the tournament MVP.

Randolph-Macon was the number one team in America in Division III entering the NCAA Tournament, earning a first round bye and home game in the second round, where they eliminated Catholic 78-65.

The Yellow Jackets next hosted one of four sectionals in the Rounds of Sixteen and Eight, defeating St. John Fisher to set up the fourth meeting of the season with Virginia Wesleyan.

In a game that produced some of the fastest, tighest defense played by two teams over forty minutes at any collegiate level, Virginia Wesleyan overcame a 47-44 deficit in the final four minutes, holding Randolph-Macon scoreless to steal a 49-47 victory and a berth in the NCAA Division III Final Four, ending the Yellow Jackets' winning streak at 25, and their season at 28-3.

It also turned out to be the final game for head coach Nathan Davis, who resigned just over a month later to become head coach at Division I Bucknell University.

Badger and his seven senior teammates produced an incredible season for Macon Nation, shattering the record for most consecutive victories, a season maybe only surpassed by the Final Four teams of 1977 and 2010. 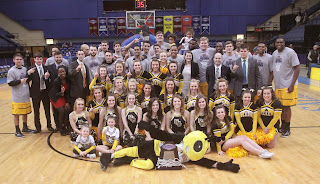 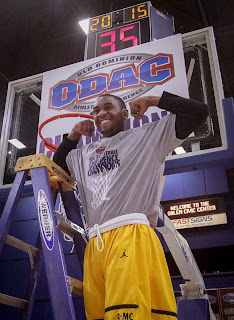 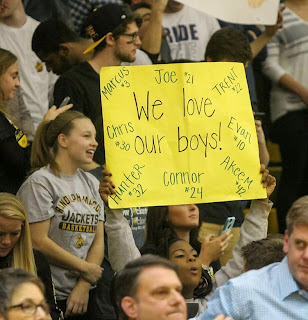 Posted by robwitham at 8:44 PM