Most Hanover Hawks baseball fans have seen Hayden Moore as the closer. But a summer project of his this year when joining Mechanicsville Post 175's American Legion baseball team was working as a starter.

Wednesday night, the rising senior showed he's ready to tackle any task on the mound. Retiring eleven batters in a row at one point, Moore went seven strong innings while Post 175 consistently found ways to score, while South Richmond Post 137 frustratingly left runners on base, as Mechanicsville won the District 11 Tournament Championship for the third time in four years with a 10-2 victory.

"Coach told me yesterday when I called and asked him when the game was," Moore said. "He said it's at seven and you get the ball."

He made the most of the opportunity, allowing just two hits over seven innings. Meanwhile his offense gave him all the cushion in the world, tying the game at 1-1 in the bottom of the first on a Brandon Crosby RBI groundout scoring Haiden Lamb, who walked and stole both second and third.

Then, in the second, Cody Thompson (Atlee/Randolph-Macon) launched a solo home run to left center to give Post 175 the lead for good, helping to chase 137 starter Will Midgette. Reliever Trent Kochheiser was greeted by Aaron Saunders with a double deep to center, scoring Andrew Simpson who also doubled, and Lamb, who got aboard with a hit by pitch.

Mechanicsville scored one in the fourth, then broke the game open with four runs in the sixth as Lamb, Saunders, Crosby, Eliott Sledd and Josh Shepherd each reached base on hits, four singles and a double (Sledd) in all.

Post 175 is now 18-2 and moves on to the American Legion State Tournament, scheduled to begin Monday in Fredericksburg. 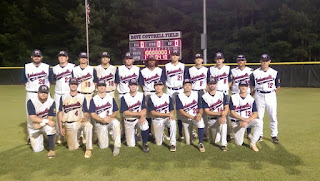 Posted by robwitham at 1:29 AM